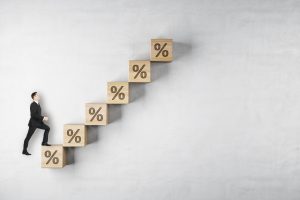 After a huge drop in mortgage rates last week, falling 0.40% over the previous week, Freddie Mac reported that the 30-year fixed-rate mortgage (FRM) experienced a surge this week, climbing back upwards to 5.51%, up from last week when it averaged 5.30%. A year ago at this time, the 30-year FRM averaged just 2.88%.

“Mortgage rates are volatile as economic growth slows due to fiscal and monetary drags,” said Sam Khater, Freddie Mac’s Chief Economist. “With rates the highest in over a decade, home prices at escalated levels, and inflation continuing to impact consumers, affordability remains the main obstacle to homeownership for many Americans.”

One of the primary drivers of this sharp uptick has been the nation’s rate of inflation, as the Consumer Price Index for All Urban Consumers (CPI-U), reported by the Bureau of Labor Statistics, increased 1.3% in June on a seasonally adjusted basis after rising 1.0% in May. Over the last 12 months, the all items index increased 9.1% before seasonal adjustment. 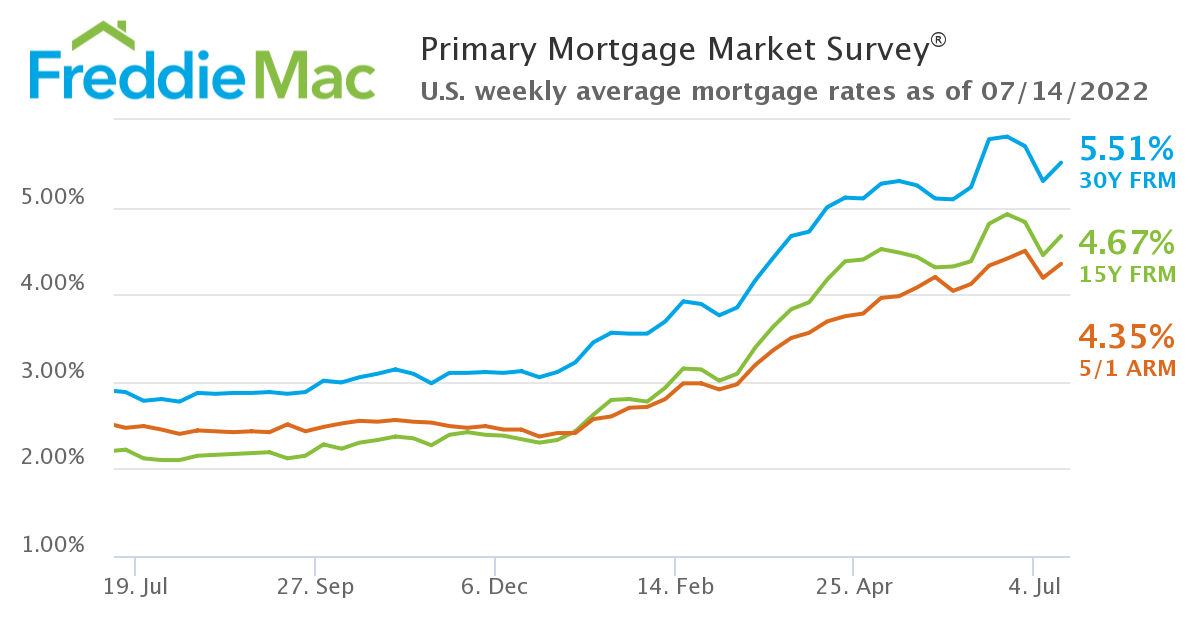 “The pace of runaway inflation is pushing mortgage rates higher and presenting a growing risk to the economy,” said Realtor.com Manager of Economic Research George Ratiu. “The 10-year Treasury slid on the news, while the two-year Treasury bounced higher, pushing the yield curve deeper into negative territory and heightening concerns of an impending recession. This is notable, as yield curve inversions have preceded most economic recessions in the past 50 years.”

As inflation digs deeper into the wallets of Americans, home buyers who were on the sidelines continue to experience very little relief in a market strewn with rates jumping around the 5% to 6% mark, and record high prices. Relief, however, may be found by some as Redfin reports that more than 25% of home sellers dropped their price in three-quarters of U.S. metros in June. These price cuts were led by Boise, Idaho, where 61.5% of the homes for sale had a price drop in June, followed by Denver at 55.1%, and Salt Lake City at 51.6%.

“Summer real estate markets are absorbing the impacts of rising consumer prices and higher interest rates,” said Ratiu. “With the monthly mortgage payment of a median-priced home running around $2,000 compared with $1,300 last year, many homebuyers are finding that their budgets are no longer sufficient to purchase a home and are hitting ‘pause’ on their search. Simultaneously, many homeowners are rushing to capitalize on record-high prices, bringing homes to market and boosting the supply pipeline. The combination of dwindling demand and growing supply is reshaping a housing market at the peak of the sales season. The end result is that the share of properties-for-sale with price cuts reached 15% in June 2022, more than doubling last June’s 7%. We can expect the pace of sales to continue to slow as we move into the second half of the year and markets regain a much-needed sense of balance.”

And what’s he solution to this all?

Many feel another rate hike by the Federal Reserve is the answer with the Federal Open Market Committee (FOMC) Meeting scheduled for July 26-27, as pressure grows to curtail a possible recession on the horizon.

“With inflation approaching a double-digit pace, there’s growing pressure on the Federal Reserve to take a more aggressive stance in its monetary tightening,” added Ratiu. “While a 75-basis point hike is all-but-baked-in at its meeting in two weeks, it’s becoming clear that markets expect a move closer to 100-basis points. The real concern is that at this pace, rising prices will push consumers up against a financial wall, leading to a sharp pullback in spending. The Fed has been walking a tightrope of gradually increasing borrowing costs while trying to avoid a knee-jerk reaction from consumers and businesses. However, with inflation soaring, the runway for a soft landing is shrinking considerably, as are the chances of avoiding a recession.”