Softening Demand to Present New Buying Opportunities in the Weeks Ahead 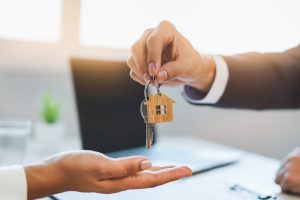 Realtor.com’s Weekly Housing Trends View, for the week ending July 9, found that the summer of 2022, typically a period of homebuying activity, is feeling a number of pressures suppressing growth, as record-high prices, inflation at a 40-year high, and mortgage rates that continue to linger in the 5.5% range are forcing many to reconsider their options.

“As households pay much more for cars, clothing, food, gasoline, and services, there are fewer dollars left over from each paycheck. With the cost of housing also rising at double-digit rates, financial decisions are becoming more difficult,” said Realtor.com’s Weekly Housing Trends View authors Senior Economist & Manager of Economic Research George Ratiu and Economic Data Manager Sabrina Speianu. “For real estate markets, there is a growing affordability crisis, with Realtor.com’s Affordability Distribution Score hitting the lowest level in our data series. For a household earning a $75,000 income, only 23% of homes on the market are affordable. In comparison, in 2018, the same household could have afforded over 50% of homes listed for sale. This affordability challenge is being felt across most income ranges, with even households earning $200,000 able to afford 74% of listed homes in June 2022, compared with 87% of active inventory in June 2018.”

Realtor.com’s research team releases regular monthly housing trends reports that break down inventory metrics including the number of active listings and the pace of the market.

Affordability remains an issue paramount to most, as Realtor.com reported the median listing price advanced by 15.9% over the same period in 2021, and the asking price remained on an upward trend at a double-digit yearly pace for the 30th consecutive week. However, listing price growth is on a downward trend, moving below the pace seen in late May and early June.

“With softening demand and rising supply, we expect to see home price growth continue to ease in the weeks ahead and continue to slow in the second half of 2022,” said the report’s authors. “The downward adjustment in the price trajectory signals a market reacting rationally to changes in underlying dynamics, and is a welcome development in the wake of an overheated market. Moreover, the outlook for buyers—many of whom have felt frustrated by hyper-competitive conditions last year—is starting to look more promising.”

Another somewhat bright spot in addition to a promising forecast is the rise in the nation’s inventory. Realtor.com reported that active inventory continued to grow, rising 28% above the same period in 2021, with several weeks of new listings coming online helping to boost the inventory level to nearly one-third higher than a year ago. 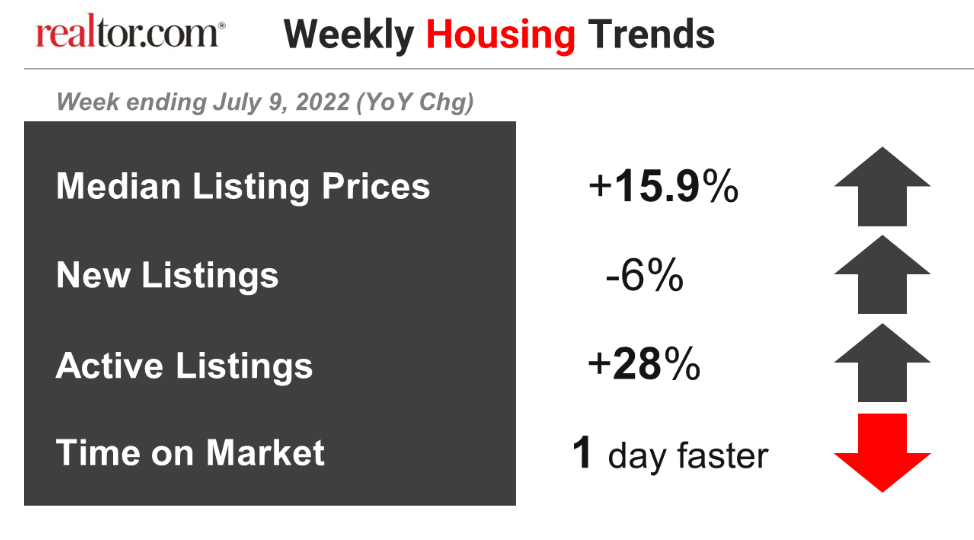 “Even though the number of homeowners putting properties for sale took a break last week, houses are also spending longer on the market in many large metro areas, contributing to a boost in homes for sale,” said Ratiu and Speianu. “Real estate markets remain undersupplied compared with 2019, but they are moving in the right direction.”

Freddie Mac reported that mortgage rates were again on the rise this week, averaging 5.51%, up after last week’s major dropoff of 0.40%.

Sam Khater, Freddie Mac’s Chief Economist, noted, “Mortgage rates are volatile as economic growth slows due to fiscal and monetary drags. With rates the highest in over a decade, home prices at escalated levels, and inflation continuing to impact consumers, affordability remains the main obstacle to homeownership for many Americans.”

Reports nationwide have found a market that is cooling, as Redfin notes in its latest analysis that more than 25% of home sellers in the U.S. dropped their price in three-quarters of the nation’s metros polled in June. Redfin found that 61.5% of the homes for sale in Boise, Idaho alone had a price drop in June, the highest share among the 97 metros in Redfin’s analysis. Boise was followed by Denver at 55.1% and Salt Lake City at 51.6%, where in each metro more than half of the homes for sale experienced a price drop.

“The road ahead points toward a rebalancing of market conditions, away from the severe undersupply and win-at-all-costs competition of 2021,” said Ratiu and Speianu. “The Federal Reserve’s commitment to fight runaway inflation means that borrowing costs will continue to rise, dampening demand. At the same time, a post-pandemic new normal means we will see more homes for sale. In turn, prices will continue to adjust to a new equilibrium.”