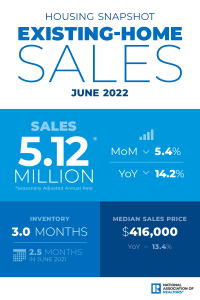 For the fifth consecutive month, existing-home sales dropped as three of the four major geographic regions of the country experienced month-over-month declines. On a yearly basis, sales sank in all four regions.

All-in-all, total existing home sales for June 2022—which includes single-family homes, townhomes, condominiums, and co-ops—sank 5.4% from May 2022 to a seasonally adjusted annual rate of 5.12 million units in June. Year-over-year, sales fell at a more drastic rate of 14.2% as total transactions in June 2021 reached 5.97 million units.

This information comes to us from the National Association of Realtors (NAR) Existing-Home Sales Report, which is published on a monthly basis.

In terms of good news from the report, total housing inventory at the end of June was 1.26 million units, a 9.6% increase from May and a 2.4% yearly increase from June 2021. The NAR estimates that the current available inventory could supply the market for three months, a number that is also up from 2.6 months from last month and 2.5 months from the same period last year.

Even as inventory increases, the average home is now on the market for a record-low of 14 days. This number is down from 16 days in May and 17 days a year ago and is the lowest number on record since the NAR began tracking the data point in May 2011. Additionally, 88% of homes sold in June 2022 were on the market for less than a month.

The NAR also found that the median existing-home price for all dwellings in June averaged $416,000. This marks the 124th consecutive month of year-over-year increases, the longest running streak on record.

"Finally, there are more homes on the market," Yun added. "Interestingly though, the record-low pace of days on market implies a fuzzier picture on home prices. Homes priced right are selling very quickly, but homes priced too high are deterring prospective buyers."

Other key data found by the report includes: