As homebuyers continue their house hunt, finding a home that’s perfect is not just about the right timing and price —it’s also about finding the right style. HomeAdvisor conducted recent survey determining the most popular house styles according to each state. The popularity of certain house styles is dependent on various factors, from region and climate, to neighborhood and personal preference.

Whatever the reason for their buyer preferences, HomeAdvisor sought to determine the most popular house styles in the country, with over 2,200 Americans surveyed for their responses. Respondents were shown visuals of 15 common house styles and asked to rate their favorites and least favorites, while they also answered some questions about their tastes. From there, it was determined the most popular house styles in 40 different states and gained some insight into what home buyers might be looking for.

The Most Attractive House Style, According to Each State

The regional results were tabulated and determined the most attractive house styles according to each state. Cottage and contemporary both scored the highest, winning eight states each. For cottage, these included states on either coast, such as Washington and Virginia, as well as states in the middle of the country, like Oklahoma.

Known for their coziness and diminutive size, cottage-style homes typically have stone or wood elements and often include porches. Cottage-style homes also make great places to collaborate with local gardeners to create the outdoor space of your dreams. 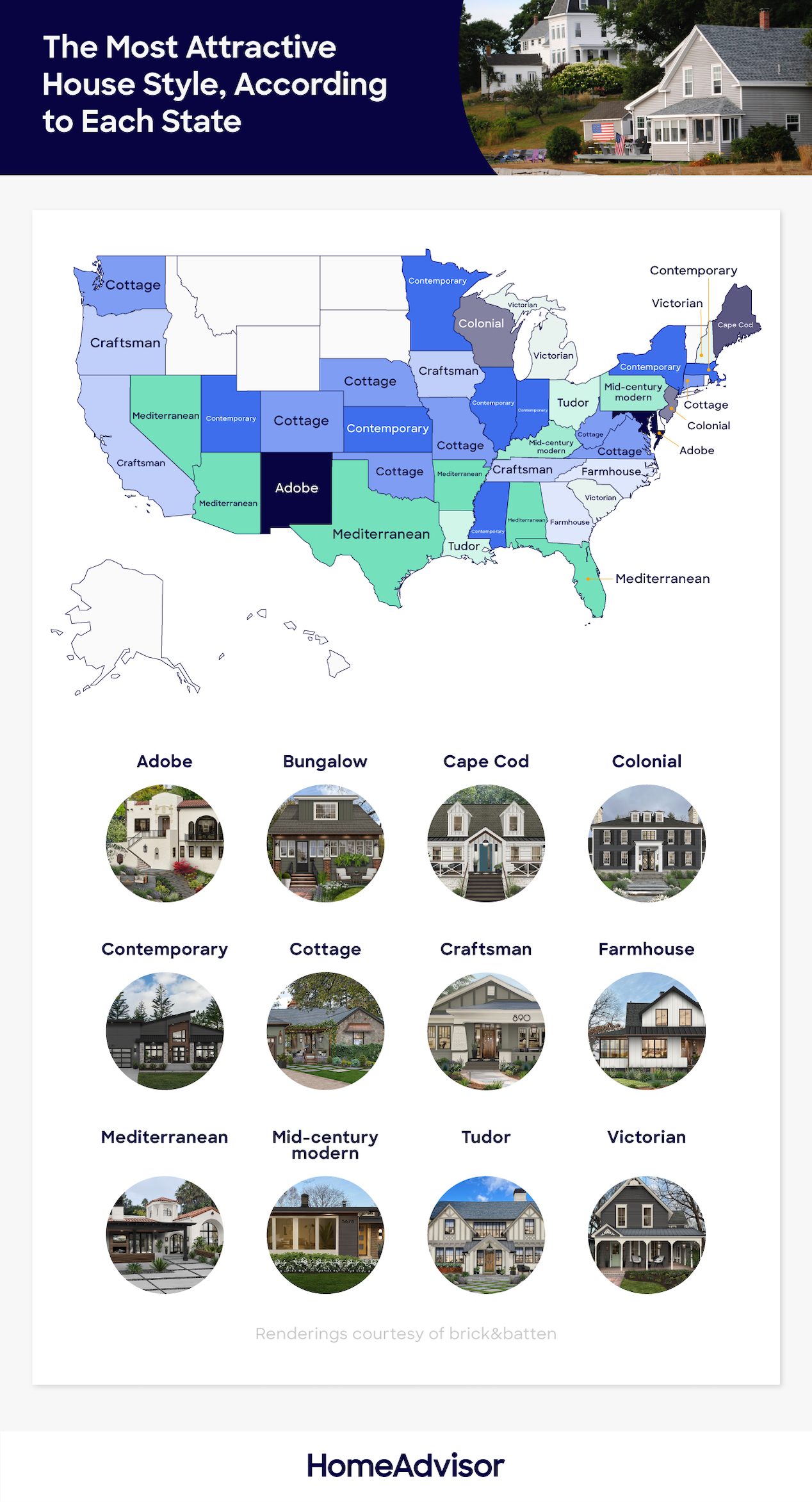 Clean and minimal are two words that define the contemporary-style home. Often grouped under the “modern” umbrella, which includes sharp, contrasting lines and colors, “contemporary” also serves as a catch-all term for what is popular in many new builds in America. In the survey, it notably won out in Midwestern states, including Indiana, Illinois, and Minnesota.

When the state-by-state analysis was removed, HomeAdvisor looked at how the 15 common house styles in their study fared nationally. Overall, respondents indicated the following as the most attractive American house styles: cottage (11%), contemporary (10%), Mediterranean (9%), and craftsman (9%). 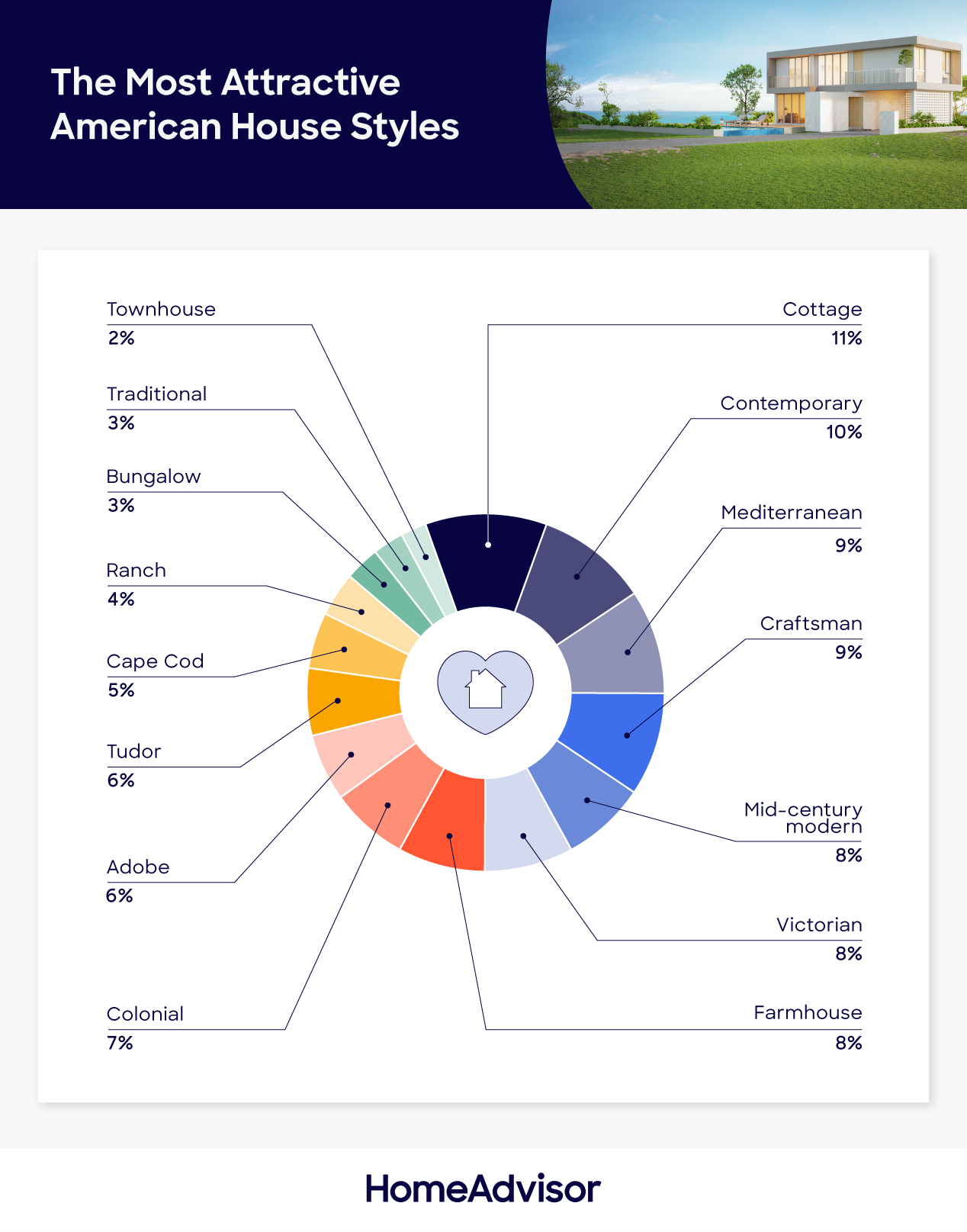 The Least Popular House Styles in the U.S.

We asked respondents which house styles they most prefer never to see again, and Americans rated several home styles in the double digits. Although some of the least popular styles included regional favorites, they also included styles we have not yet discussed, such as adobe (14%) and townhouse (11%) styles.

Popular in the Southwestern part of the U.S., adobe houses can withstand the harsh sun with their thick walls and flat roofs. Originally created by the indigenous Pueblo people, the materials used to create these houses were sourced from land near the region’s rivers.

As for townhouses, you’ll typically find these in cities, typified by their long and narrow construction, shared walls with other homes, and two or more interior levels. 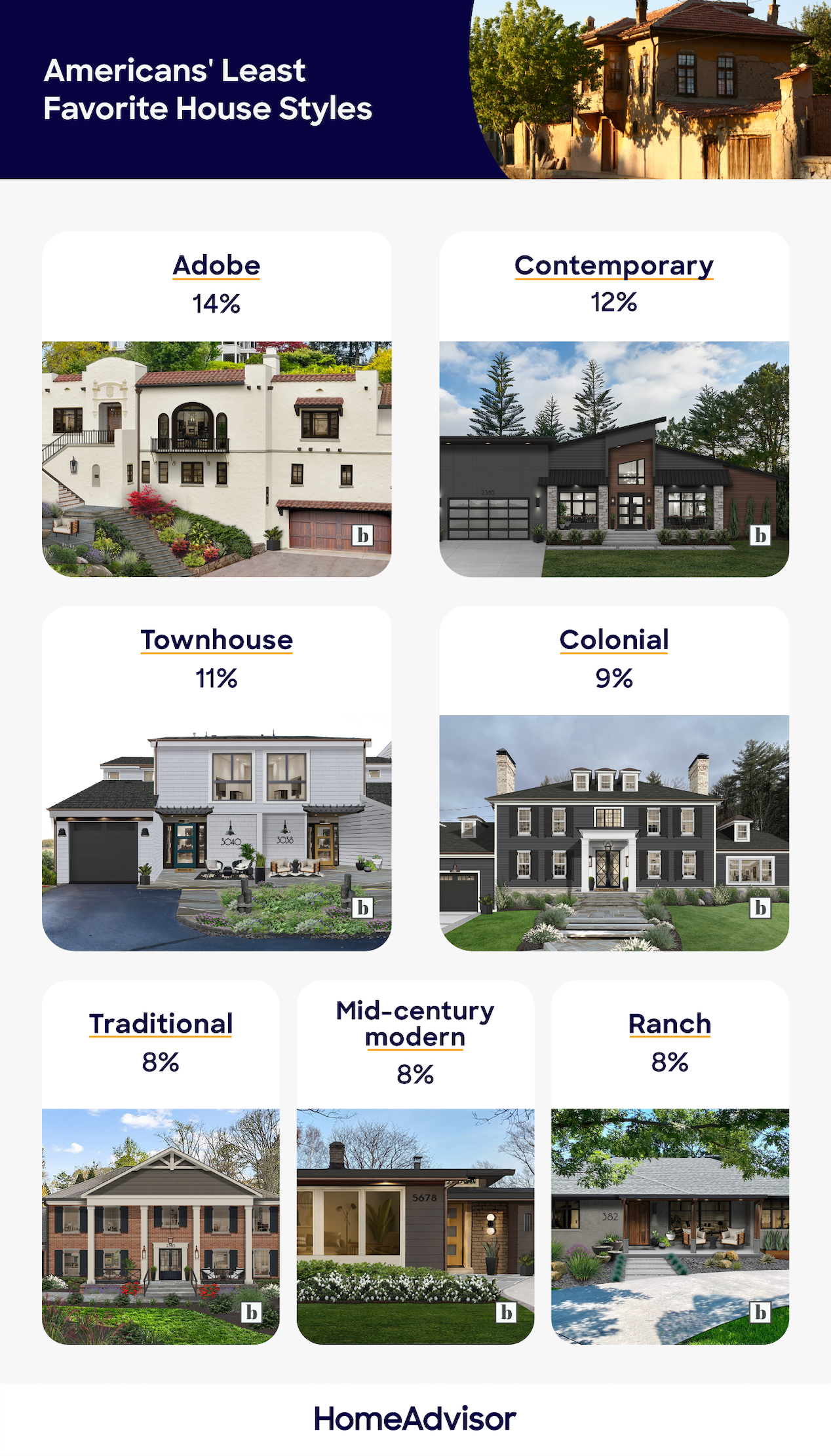 Interestingly, 12% of respondents voted the contemporary style as their least favorite, even though it also ranks among the most popular. While this style was popular in the Midwest, states that disliked it tended to be southern, such as Texas, Kentucky, Georgia, and Arkansas. Clearly, Americans are split on whether or not they prefer contemporary architecture.