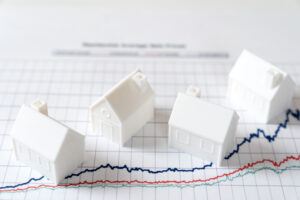 As the Fed raised rates once again last week, mortgage rates began to dip, and prospective buyers again emerged from the shadows of weeks of diminished housing interest to again dip their toes into the waters.

For the week ending July 29, the Mortgage Bankers Association (MBA) reported that application volume rose 1.2% week-over-week, according to the MBA’s Weekly Mortgage Applications Survey. This uptick in apps marked the first week in a month of rising app volume.

“Mortgage rates declined last week following another announcement of tighter monetary policy from the Federal Reserve, with the likelihood of more rate hikes to come. Treasury yields dropped as a result, as investors continue to expect a weaker macroeconomic environment in the coming months. The 30-year fixed rate saw the largest weekly decline since 2020, falling 31 basis points to 5.43 percent,” said Joel Kan, MBA’s Associate VP of Economic and Industry Forecasting.

A dip in mortgage rates slightly drove up interest in refinance applications, as the MBA reported the refi share of mortgage activity increased to 30.8% of total applications, up slightly from 30.7% the previous week.

Adjustable-rate mortgage (ARM) activity, a product that had shown glimpses of rising over the past few weeks, fell to 8.4% of total applications.

“The drop in rates led to increases in both refinance and purchase applications, but compared to a year ago, activity is still depressed,” added Kan. “Lower mortgage rates, combined with signs of more inventory coming to the market, could lead to a rebound in purchase activity.”