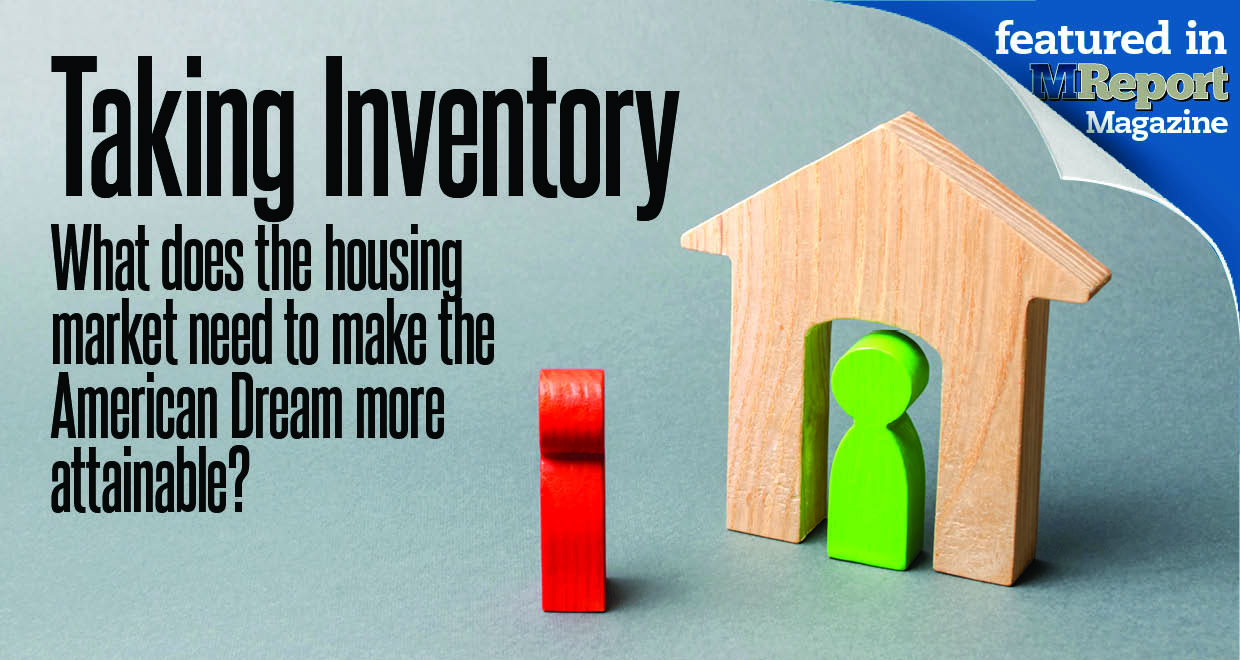 Homeownership is at the core of the quintessential “American Dream.” People want a place to call their own and raise their families. Many also see homeownership as a way of accumulating wealth and sharing in the success of the American economy. For decades, the government has pursued policies that help Americans achieve the dream of homeownership, from tax incentives for homeowners and government-backed mortgage financing, to laws and regulations that protect mortgage borrowers. These policies have helped America achieve a high degree of homeownership, with over 60% of households owning their homes.

First-Time Homebuyers and the American Dream
The housing boom and subsequent bust in the early 2000s reduced homeownership, started a painful recession, gave rise to increased inequality, and created hardship for over 8 million households who lost their homes to foreclosure. As a result, between 2012-2016, many argued that potential homebuyers were no longer interested in homeownership, or that they did not have the resources to afford a home. Neither of those descriptions have turned out to be accurate, as the homeownership rate has grown from 63.5% in Q1 2016 to 65.6% in Q1 2021. During this period, first-time homebuyers accounted for 89% of the growth in home sales. Furthermore, 2.38 million Americans became first-time homebuyers in 2020—up 14% from the same period a year ago, according to Enact data. Four reasons explain why the earlier predictions of low homeownership did not pan out: demographics, low interest rates, the COVID-19 pandemic, and continuing home price growth.

Much of this resurgence in homeownership can be attributed to the fact that most millennials are reaching their 30s, which is the peak homebuying age. The millennials make up the largest generation in history, and their decisions have the potential to influence both markets and society. Whether it was because they needed their own place to work from home or simply wanted to take advantage of low interest rates, this group of buyers took advantage of the opportunities before them and were able to achieve the dream of homeownership. Their influence on the housing market is not limited to their individual decisions to buy and own a home, however. Through social media, television, and other media channels, their decisions influence other generations and buyer groups to become more interested in buying a home.

Historically low interest rates also have placed the dream of homeownership well within reach. Since most home purchases are financed by a mortgage, mortgage interest rates form an important component of the cost of owning a home. Between 2010-2019, the 30-year conventional mortgage rate has averaged 4.1%, 2.2 percentage points below the previous decade’s average. Following the pandemic, mortgage rates have come down by another percent. Lower mortgage rates mean that the cost of owning has decreased relative to renting.

As we continue to work our way through the pandemic and begin to see light at the end of the tunnel, there is more demand than ever to own a home. In the early days of the pandemic, people were forced to stay home to stop virus transmission and stay safe. Over the ensuing 12 months, both employees and businesses have discovered the joy of working from home. There’s less of a commute, more flexibility, higher productivity, and huge potential cost savings. While it is unclear what the workplace will eventually look like, the pandemic will probably mean more flexibility for people to work from home.

People are excited to have their own place to call home—and an office, a gym, a classroom, and whatever else it needs to be. Home has become more than just a center for family life, but for all aspects of life—and while most of what we’re used to is beginning to return to some sort of sense of normalcy, some of the preferences for fulfilling certain duties or activities at home are bound to stick around, likely keeping demand for homeownership high.

This trend applies not just to first-time homebuyers, but to all buyers. Second-home buyers have been rapidly moving into the market as well. Since many of them no longer work with location or in-office constraints, they can buy a second home anywhere they like and work from there. This has made the decision to buy a second home very appealing for those who can afford it, creating additional demand. As more people are buying second homes, they also are contributing to the lack of inventory in the market that has created a challenge for other homebuyers.

In a low-interest-rate environment, the traditional low-risk forms of savings such as bank deposits and Treasuries are no longer attractive enough for individuals and families saving for retirement. Therefore, more people are seeing homeownership as a vehicle for building wealth. Prior to the pandemic, home prices had grown by an average of almost 6% a year between 2013-2019. Housing as an asset class has performed well in the pandemic. Home price growth rate accelerated beginning in the second half of 2020, with the growth rate reaching 13.9% in March. Today’s low rates make it a great time to buy property to rent, develop, or sell later—again, taking inventory away from prospective first-time homebuyers or other potential buyers.

Many potential first-time homebuyers are now under great pressure to snap up whatever properties they can get, often competing against both second-home buyers and investors. Inventory has been low since the housing bust, but recently properties are being acquired so quickly that there are not enough houses left for those that want to buy. Due to that, home prices have continued to increase.

This demand, however, is the very thing that is pushing the American Dream further out of reach for so many. With low rates, everyone is looking to buy.

Affordability Issues
Without enough inventory to keep up with demand, prices are surging. Annually, the percentage increase in home prices is usually between 5% and 6%. This year has come in at three times as much, with an increase of somewhere between 13% and 15%, causing home prices to increase by tens of thousands of dollars. As a result, even if buyers can find a home available on the market, it may be unaffordable.

The lack of inventory also leads to bidding wars. Too many buyers want the same house, as not many are available for the number of buyers in the market.

These bidding wars drive prices up even further, creating another affordability issue. New builds also can help lower home prices and ease inventory challenges, but with supply chain challenges, labor issues, and the price of lumber, prices to build a new home are high as well.

Solutions—and Warnings
It is important to note that there is no one solution for this complex issue. The challenge facing buyers and policymakers is to create affordable conditions for housing on the supply side. New builds and relaxed zoning policies can help with the issue of inventory, but they will take time to bring any meaningful benefit.

While subsidies for first-time or low-income homebuyers can help with affordability for some groups of buyers, it still does not address the issue of insufficient inventory for the entire market. From an economist’s perspective, higher home prices are, in itself, a solution. Previously unattractive parcels of land suddenly became attractive for development because of higher prices. Builders and developers build smaller homes and find ways to reduce cost. Housing is always competing for land that could be used for agriculture, commercial, industrial, and office space. Rising home prices will mean more land will go to housing instead of alternative uses. Again, local governments need to find ways to allow land to be used for housing.

To get people into homes, lenders can help borrowers prequalify and make sure they have enough money upfront to win any bidding wars, however, lenders also must be cautious about this. Sustainable homeownership is important. If a borrower ends up paying too much and it is not sustainable, we risk another crisis like we saw in 2008. For potential first-time homebuyers, owning your own home is a worthwhile goal, but not at any cost. Stay within your budget and resist the social pressure. One lesson that economist Robert Shiller has taught us is that, over the long-term, housing should see only moderate appreciation; think of the rate of inflation plus one to two percent. That means buying after a period of strong appreciation will likely mean lower return in the future. Like so many things, it pays to be patient.

There has been so much innovation in both mortgage and housing over the past year, and that innovation will have to continue with mortgage lenders, real estate agents, and policymakers in order to solve for a lack of inventory and affordable options.

Keep Dreaming
We have seen time and again that most Americans still aspire to own their homes. Low interest rates have kept homes affordable, while more and more millennials are thinking about buying homes. The last decade has been a good time for those who bought their homes, delivering steady and consistent price gains and helping homeowners build wealth. The pandemic has made housing even more desirable, heating up the housing market once again. The challenge facing the market now is the lack of inventory, which made rising home prices inevitable, but which at the same time are necessary to encourage more supply.

As with challenges the market has overcome in the past, innovation and a free market are two key elements of the housing industry that provide a foundation for making the American Dream possible.

Previous: Interfirst Expands in the Chicago Area
Next: The Week Ahead: Exploring Non-QM Options

Tian Liu has served as the Chief Economist for Genworth Mortgage Insurance Corporation since 2014. He is responsible for tracking and analysis of U.S. and regional economic conditions. He authors the company’s Weekly Economic Report and provides regular updates on housing and mortgage markets. Mr. Liu began covering the U.S. housing market in 2007. His commentary on the housing market has appeared in the Wall Street Journal, New York Times, CNBC, Washington Post, and other notable publications. Mr. Liu has a Masters in Economics from the University of Chicago and an undergraduate degree in Economics from the Australian National University. The statements provided are the opinions of Tian Liu and do not reflect the views of Genworth or its management.