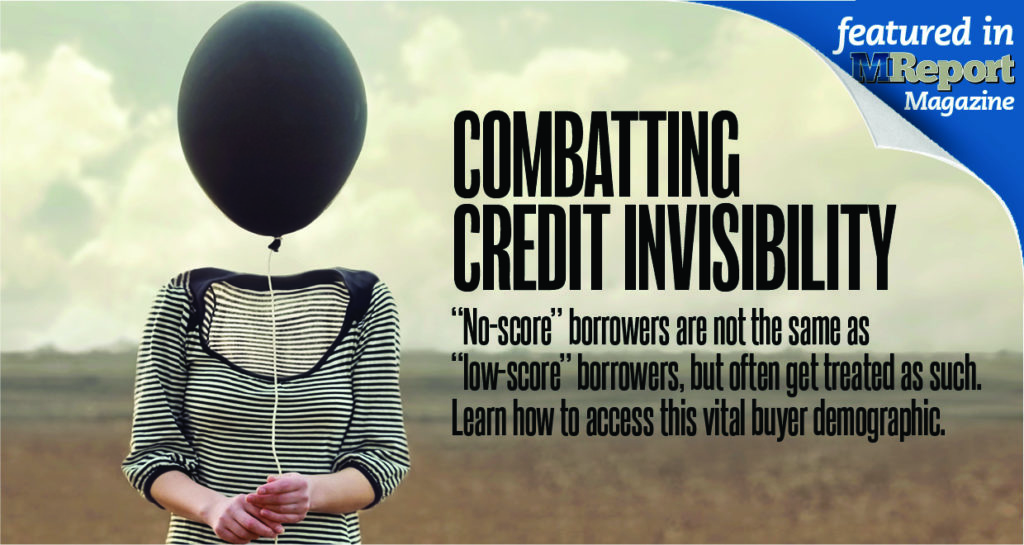 Editor's note: This feature originally appeared in the August issue of MReport, out now [1].

Following the Great Recession, lenders shied away from working with nonprime borrowers, but with a rising-rate environment emerging, many lenders are reevaluating that position, particularly as it relates to so-called “no-score” borrowers.

One of the lingering impacts of the recession is the way in which it has informed how individuals manage money. Ten years ago, many of today’s homebuyers were either graduating from school and getting started in their careers or were well into their vocation and lost their savings, homes, and jobs. This event taught them valuable lessons about fiscal responsibility and had a two-fold effect: 1) Those of the first category have been slower to enter the housing market than prior generations and 2) They all almost universally have a disdain for carrying debt. This extends to all types of debt, including basic credit cards, which has impacted the industry’s ability to apply traditional credit scoring to them.

The Truth Behind the Numbers

It’s true that millennials have the numbers, but other types of borrowers may not have a FICO score for other legitimate reasons, including:

Unfortunately, many lenders want to treat borrowers like these as low-score or subprime, but they are not, and a borrower who demonstrates financial responsibility through the pursuit of a debt-free lifestyle should not be penalized for this worthwhile effort. Their intentional avoidance of debt or lack of a FICO score does not make them unqualified for a mortgage or loan. In reality, all it means is that the potential borrower has either paid down all of their past debt or elected to avoid debt outright, which is not a good qualifier of creditworthiness. It’s an element to keep in mind, but it should not be the sole consideration.

These experienced credit users also frequently have higher than normal reserves. Typically, they have somewhere in the range of at least 15 to 20 months of reserves saved in their bank or retirement accounts, but sometimes, “no score” borrowers will have closer to 70 or 80 months of reserves. That’s almost six and a half years of payments that the borrower could draw on!

How to Qualify a NoScore Loan (And Sell It)

Alternative credit at its core is simply any definitive proof or justification for a borrower’s creditworthiness beyond a traditional FICO score. This can include a potential borrower’s history of rent or utility payments, childcare, rent-to-own agreements, or even monthly insurance payments. All of these serve as reliable indicators of a potential borrower’s creditworthiness. If a borrower successfully makes the same payment every month, has held a consistent job, and has never defaulted on a loan or contract, that person is likely a reliable borrower.

Also, keep in mind that many of these borrowers have large cash or investment reserves. The standard debt-to-income (DTI) ratio for a borrower today is typically around 36 percent for their mortgage. Many no-score borrowers, on the other hand, adhere to a higher standard of financial responsibility and seek out mortgages that will bring them closer to a DTI of 28 percent. This further reduces the chance of default on the part of the borrower.

One of the most significant issues with “no-score” loans concerns nondepository lenders, who must determine how best to package and sell those loans on the secondary market.

In general, the GSEs are not keen to purchase “no-score” loans, and thus, there are additional charges that come along with originating them. This is particularly true with out-of-scope or manually underwritten loans, which frequently occur when neither borrower has a credit score. For a 95 percent 30-year conventional mortgage, the charge typically amounts to three and a quarter points of the entire loan itself. Not to mention the GSEs’ ability to come back and force lenders to buy back the loan.

Some lenders are choosing to pass that cost onto borrowers in the form of additional fees, which is frankly wrong. Why should a borrower pay a fee for acting with financial responsibility and not taking on additional debt or credit that they do not need? Such practices led to the 2008 recession and have stereotyped the financial services industry since.

With the state of the market today, it’s a stark reality that all lenders are looking for ways to cut costs and maintain a steady stream of profit. The FOMC is likely to continue raising interest rates throughout the remainder of the year, which will further stymy refinance activity. While this has been a more-than-optimal market for lenders over the previous seven or eight years, one can expect that business will slow to a more balanced pace in the coming years.

For most lenders, this means that now is the time to start thinking about what niche they occupy in the market and the type of relationship they have with borrowers. This may include focusing on VA loans for some or jumbo mortgages. Either way, it will be increasingly important to have an area of focus in the coming years. More importantly, all lenders will need to ensure they have an honest, consultative relationship with their borrowers— this is where taking the long view of things will have an impact.

And, this does not mean looking to the next quarter, year, or even the next five years. Instead, the long view is looking 20, 30, or even 40 years down the road from now. Even if a lender originates a borrower’s first mortgage, they may never hear back from them on their second or third, much less their fourth or fifth. That’s why it’s important to establish relationships with first-time borrowers. It’s especially important to create a link that will keep those borrowers returning for more throughout their entire lives.

Likewise, there is increasing value in helping borrowers identify loan products that fit their individual long-term financial goals. In the past, tactics such as offering borrowers a lower interest rate was seen as the best way to compete with other lenders, but today, borrowers require much more than just a low rate. Instead, they want to ensure that they are in the right loan for them, and for their offer on a home to be the best possible. Tactics such as pre-underwriting borrowers and providing them with digital tools to support their home search serve as a compelling value-add to the borrower-lender relationship, as well as to the lender’s relationship with realty agents.

It’s also important to keep in mind that many borrowers are already wary when approaching a lender. According to Ernst & Young’s 2016 Global Consumer Banking Survey, only 26 percent of respondents have complete trust that banks will provide genuinely unbiased advice. By demonstrating a commitment to providing borrowers with the best guidance possible and helping them towards fulfilling their long-term financial goals and needs, lenders can set themselves apart from the competition and establish those meaningful relationships.

When considering “no-score” borrowers, there’s an old saying that comes to mind—“The only people who can get a loan are those who do not need a loan in the first place.” These borrowers are a prime example of this adage in action, except practically most everyone today must take out a mortgage to buy property. Whether due to market timing, financial security or other reasons, acquiring the capital to purchase a home typically requires one to go through a lender.

Currently, however, these “no score” borrowers are being mischaracterized as subprime or “low score” when in actuality, they can be some of the most-qualified borrowers around. Those with low FICO scores, which are a definite red flag, do not fall within this spectrum.

By not working with these types of borrowers (or worse, outright avoiding them), lenders are only hurting themselves and their communities in the long run. Opening up to “no-score” borrowers is a move that not only demonstrates lenders’ commitment to supporting borrowers as they move down the path of financial responsibility but one that also improves lenders’ overall business by expanding their customer base and referral reach, Not to mention that it is also the ethically right thing to do.