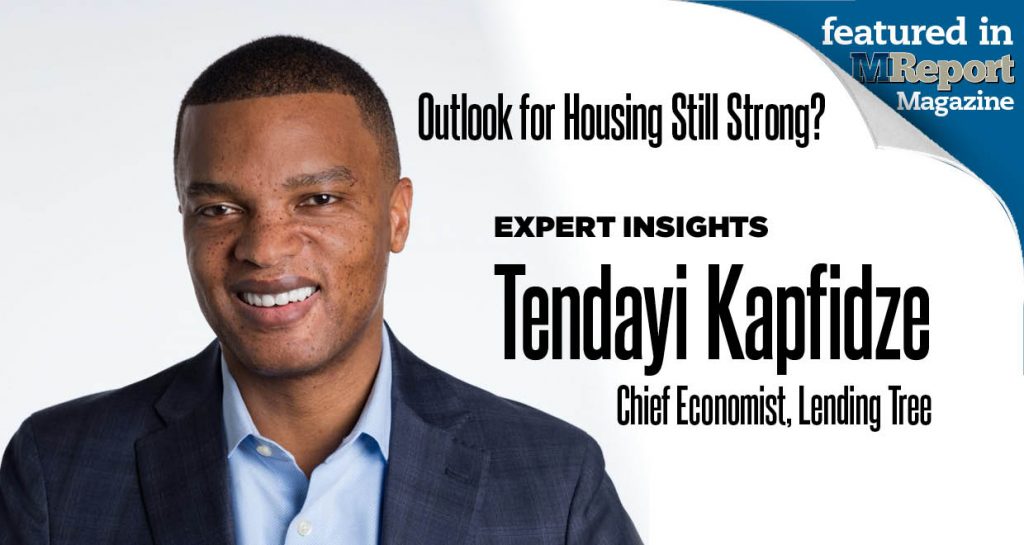 This story originally appeared in the August edition of MReport.

Tendayi Kapfidze, Chief Economist, Lending Tree, said housing is still poised for a strong finish to 2020 despite COVID-19—but not as strong as it could have been.

He discussed with MReport on how the reopening of cities across the nation will impact housing, as well as delving into actions by the Federal Reserve.

M: How could the reopening of cities across the nation impact housing?

KAPFIDZE: It’s been a really fascinating time in the housing market with the COVID-19 crisis, and also the various interventions that we’ve seen from the Fed. If you go back to earlier this year, people were expecting this year to be a really strong year for the housing market, and then we started off the year with a big drop in interest rates and then the COVID19 crisis hit us. What was happening at the time is people were concerned about whether people would one, be able to go out and view houses, and two, whether people who were selling would actually want people walk- ing through their house touching everything given the health concerns that were out there. What we saw at the time was that there was a huge decrease in supply of homes and a lot of homes were taken off the market.

Since then, we have had a remarkable recovery in the housing market, probably recovered and sustained through this crisis better than any other sector of the ed to the COVID-19 crisis. There’s economy. A big part of that is the decrease in interest rates. Part of it a function of the Fed intervention, not necessarily the cut in the Fed funds rate, but rather the Fed’s commitments to buy treasuries and to buy mortgage backed secu- rities, which has brought mort- gage rates down to all-time lows.

What that has done is it has motivated a lot of people who were maybe on the fence about buying back into the market, and it has brought back a lot of people who in February and March and April maybe, had stepped away from home buying and are realiz- ing that this might be an oppor- tunity that doesn’t come around pretty frequently.

With the reopening and people being able to go and view houses again, and the industry has adapted a lot of different interventions that real estate agents are doing in order to keep everybody sanitized essentially, and we’ve seen things such as mobile and virtual closings for home sales. That’s putting a lot of momentum as well into the housing market.

It looks like it’s going to be a pretty strong year for the housing market. We’ll probably still lose some sales because we lost a month or two of activity, and some of that won’t all be brought back. But it’s going to be a better year for the housing market than you’d have anticipated back in February and March when the coronavirus crisis was beginning.

M: How will the Fed’s recent actions impact economic recovery from COVID-19?

KAPFIDZE:  That’s very uncertain and very unknown. I feel sorry for the Fed because they have a set of tools that aren’t exactly attuned to every type of economic crisis or economic situation. If you go back to the financial crisis, that very appropri- ate or very well fit to respond to Fed intervention.

That’s why you see, for example, the sprints in the stock market, and you see interest rates pretty low.

The problem is in the real economy—not all these Fed actions translate. We just saw jobless claims today, another 1.5 million thereabouts. So upwards of 30 million people have lost their jobs through this crisis. We saw strong fiscal support from the Congress, but that fiscal sup- port is going to end in July. And I think the Fed interventions are not going to have an impact on the unemployment crisis that we’re facing in the country.

Previous: Nicole Booth Joins Notarize as EVP of Public Affairs
Next: Mortgage Applications Are On the Rise