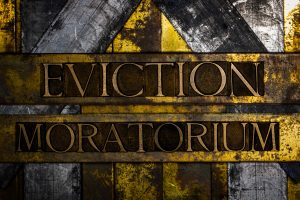 Late Thursday, the U.S. Supreme Court, by a vote of 6-3, blocked the Biden Administration's order prolonging the federal eviction moratorium to counties experiencing substantial community transmission levels of COVID-19. It was the opinion of the Supreme Court that the U.S. Centers for Disease Control (CDC) exceeded its authority by issuing the temporary ban.

Earlier this month, CDC Director Dr. Rochelle Walensky signed an order determining the evictions of tenants for failure to make rent or housing payments could be detrimental to public health control measures to slow the spread of COVID-19. The CDC order was set to expire Sunday, October 3, 2021.

“The Biden Administration is disappointed that the Supreme Court has blocked the most recent CDC eviction moratorium while confirmed cases of the Delta variant are significant across the country. As a result of this ruling, families will face the painful impact of evictions, and communities across the country will face greater risk of exposure to COVID-19,” said a White House statement issued by Press Secretary Jen Psaki.

The CDC’s moratorium has prevented many in the nation from eviction, with an estimated seven million still behind on housing payments due to pandemic-related issues. And while Congress approved nearly $50 billion to help Americans pay back rent and avoid eviction since the onset of the pandemic, the process of doling out assistance to those in need of it has been met with some roadblocks.

Earlier this week, the U.S. Treasury reported that nearly $46 billion in government rental aid is still being disbursed at a sluggish pace, with approximately 11% so far in the hands of renters and property owners who need it. While the pace of distribution increased moderately from the prior month, total aid disbursed to date comes to just about $5.1 billion, according to the Treasury.

"I am deeply disappointed by the Supreme Court’s ruling on the CDC’s eviction moratorium. With this decision, the Court has put millions of Americans at risk of losing their homes—even as the Delta variant heightens their risk of exposure to COVID-19," said U.S. Department of Housing and Urban Development (HUD) Secretary Marcia L. Fudge. "Many of these Americans are among our most vulnerable—including senior citizens, people with chronic illnesses, young children, and families with the lowest incomes. I pledge that the Department of Housing and Urban Development will continue to use every tool at our disposal to protect those people whose health and well-being are now in jeopardy."

HUD Secretary Fudge, along with Secretary of the Treasury Janet L. Yellen, and Attorney General of the U.S. Department of Justice Merrick B. Garland sent a letter to state and local government leaders addressing the eviction moratorium.

"The spread of the Delta variant has led to a rise in cases, many Americans are just getting back on their feet from the economic downturn, and millions remain at risk of eviction," said the letter. "With lives on the line, it is imperative that we act-at all levels of government-to keep people in their homes and prevent a surge in COVID-19, as well as the long-term economic scarring and poor health consequences that come with eviction.

The CDC’s moratorium extended important protections to tenants, but was far from comprehensive, according to “Preliminary Analysis: 11 Months of the CDC Moratorium,” a report issued by The Eviction Lab. “Tenants were required to provide a declaration of qualification to their landlords, who could continue to file eviction cases and challenge tenant eligibility in court.”

The Eviction Lab estimates that the CDC moratorium has helped prevent 1.55 million eviction filings nationwide since being issued in early August.

“In light of the Supreme Court ruling and the continued risk of COVID-19 transmission, President Biden is once again calling on all entities that can prevent evictions–from cities and states to local courts, landlords, Cabinet Agencies–to urgently act to prevent evictions,” said Press Secretary Psaki.

In late July, a group of elected officials, including Reps. Cori Bush, Ilhan Omar, and Ayanna Pressley slept outside the U.S. Capitol in a form of protest over the expiration of the previous eviction moratorium. A victim of eviction at one time herself, Rep. Bush urged her colleagues to take action before Congress was scheduled to take their recess beginning August 1.

“We didn’t sleep on those steps just to give up now,” Tweeted Rep. Bush after the Supreme Court's decision. “I urge my colleagues to reflect on the humanity of every single one of their unhoused, or soon to be unhoused, neighbors, and support a legislative solution to this eviction crisis.”