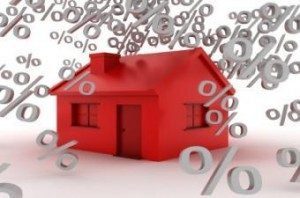 Freddie Mac  this week released the results of its Primary Mortgage Market Survey, which indicated that the 30-year fixed-rate mortgage (FRM) averaged 2.91%.

“This year has been anything but normal and as the uncertainty lingers, mortgage rates remain near record lows,” said Sam Khater, Freddie Mac’s Chief Economist. “These rates continue to incentivize potential buyers and the home buying season, which shifted from spring to summer, will likely continue into the fall.”

Main takeaways from this week's report:

5-year Treasury-indexed hybrid adjustable-rate mortgage (ARM) averaged 2.91% with an average 0.2 point, unchanged from last week.  A year ago at this time, the 5-year ARM averaged 3.31%.

The PMMS is focused on conventional, conforming, fully-amortizing home purchase loans for borrowers who put 20% down and have excellent credit. Average commitment rates should be reported along with average fees and points to reflect the total upfront cost of obtaining the mortgage.

Visit the following link for the Definitions. Borrowers may still pay closing costs which are not included in the survey. 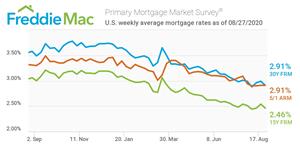 In a separate survey of rates by Bankrate this week, the average 30-year fixed-rate mortgage maintained last week's record low of 3.14%. (According to MSN Money, the gap with Freddie Mac's number is because Bankrate's figure includes points and origination fees averaging 0.33%, while Freddie's number excludes those costs. Freddie Mac said its average is accompanied by an average of 0.8 of a point.)