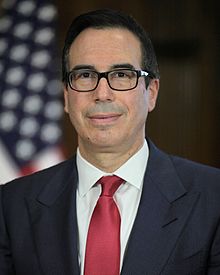 Secretary of the Treasury Steve Mnuchin has called for legislation raising the debt ceiling to be tied to Hurricane Harvey relief, according to an interview with Fox News Sunday. The Secretary fears that if the debt ceiling isn’t raised, the Treasury Department will be unable to borrow the money it needs to aid areas in Texas and Louisiana affected by the storm.

According to multiple news sources, Texas Governor Greg Abbott has estimated anywhere between $100 billion and $180 billion could be needed to rebuild after the storm.

The White House asked Congress for $7.85 billion in immediate aid, with $6.7 billion in additional funds. According to Mnuchin, the United States had enough funding through September 30, 2017, but the requested funding for Harvey has moved that date forward.

“Without raising the debt limit, I’m not comfortable that we will get the money that we need this month to Texas to rebuild,” Mnuchin said. “And that’s our priority. We need to help the people in Texas, and we need to get that done.”

If Congress is unable to pass a budget by early October—maybe sooner when considering the cost of Harvey relief—the U.S. could be at risk of government shutdown as well as defaulting on its debt.

While the U.S. has never defaulted on its debt, it has come close. In 2013, Congress was unable to pass a budget in time for the fiscal year start in October, which led to a government shutdown and the BBC to speculate on the implications of a U.S. default in the global marketplace.

According to the article, the accepted notion is that a U.S. default would cause a spike in interest rates around the world and the value of bonds would decrease, resulting in higher yields. Because 30-year fixed mortgage rates are directly tied to Treasury bonds, interest rates could rise as well, although nothing is set in stone.

“As President, [tax reform] is also one of his biggest priorities to create economic growth,” said Mnuchin. “We’ve been working since January with the leadership in the House and the Senate. We want to make sure we have one plan—not three plans. The objective is to get this passed and get it to the President’s desk this year.”

Mnuchin also noted at the end of the interview that the current draft of the tax plan would keep the mortgage interest rate deduction intact.

Previous: Cordray Addresses Income Inequalities
Next: Could a Housing Crisis be Averted?