If eligible homeowners did not feel like they had an incentive to refinance prior this week, perhaps Freddie Mac’s Primary Mortgage Market Survey (PMMS) for the week ending September 8, 2016, will convince them.

“The 30-year fixed-rate mortgage fell 2 basis points to 3.44 percent this week,” said Sean Becketti, Chief Economist with Freddie Mac. “As mortgage rates continue to range between 3.41 and 3.48 percent, many are taking advantage of the historically low rates by refinancing. Since the Brexit vote, the refinance share of mortgage activity has remained above 60 percent.” 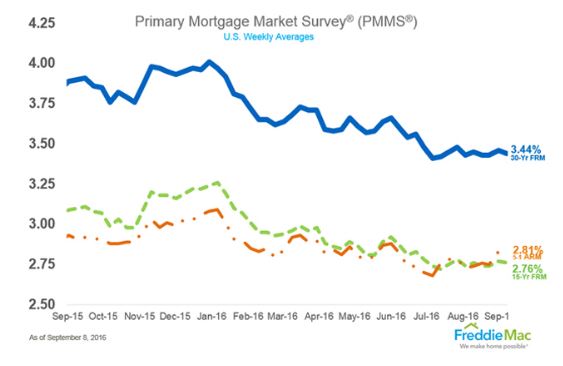 The HSH.com Mortgage Rates Radar for the week ending September 6, 2016, reported a similar decline—1 basis point down to 3.53 percent. Mortgage rates have been hovering around that range for the last nine weeks and have been below 4 percent all year, since the Fed raised the short-term interest rates in December for the first time in nine years. Many predicted another rate hike by the Fed at its next monetary policy meeting on September 21, but an August jobs report that fell short of expectations may prevent that from happening.

“The key August employment report was ambiguous,” said Keith Gumbinger, vice president of HSH.com. “With 151,000 new hires, it was strong enough to suggest the economy remains on solid ground, but not so strong as to suggest that the Federal Reserve needs to lift short-term interest rates later this month, so mortgage and other interest rates continue to play a wait-and-see game.”

Gumbinger continued, “Could the Fed make a move, even though there isn't great data to support it? Certainly. When they raised rates in December, financial markets were calm, as they are now. Economic growth was cooling to a level not even as strong as we see today, and inflation was running at about the same pace, so there remains at least some possibility that the Fed could decide to make another small move in rates this month. The consequences—effects on mortgage and other interest rates—of doing so would likely be minor, anyway.”

Previous: The Most (and Least) Expensive Housing Markets
Next: HELOC Borrowers Might Be Making a Comeback