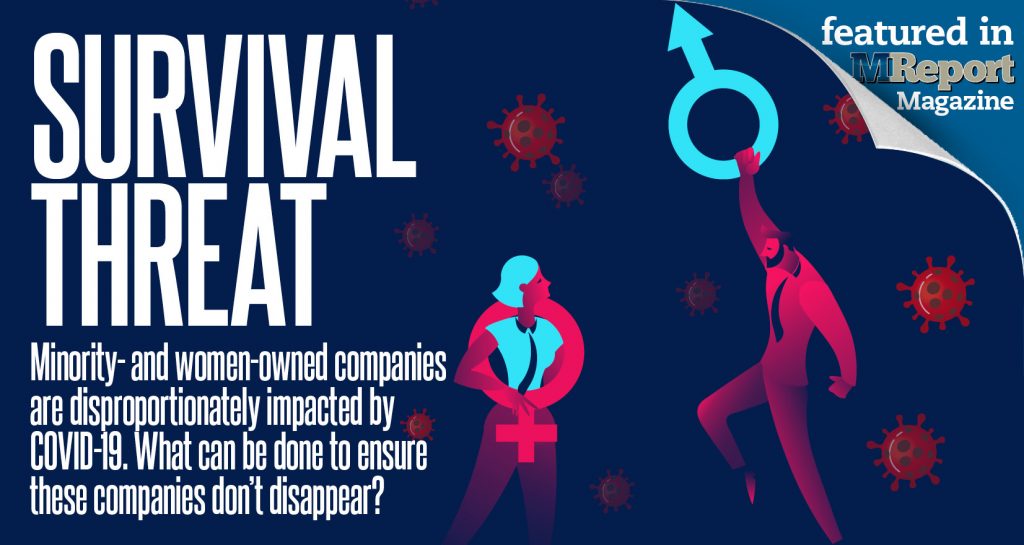 This story originally appeared in the September edition of MReport, out now.

The stats are in, and they are sobering. Over 50% of small businesses with employees, face immediate risks to survival due to the impacts of COVID-19.1 This represents about 4 million companies, with “small business” being roughly defined as those with fewer than 250 employees. Within the small business category are minority- and women-owned business enterprises (MWBEs).

Going into the pandemic, research found that minority- and women-owned business development is limited by disparities in education, personal wealth, and access to capital. 2 An additional factor is historical discrimination: highly rated businesses in majority Black neighborhoods earn less revenue than businesses with similar ratings outside of Black neighborhoods, amounting to nationwide annual revenue loss as high as $3.9 million, by some estimates.

What parallels can be drawn with the last big economic crisis? The U.S. Census Bureau found that about 60% of white-owned business that existed in 2002 survived until 2011, compared to 49% of Black owned businesses and 55% of women-owned businesses.

Conversely, MWBEs assisted the recovery after the recession of 2009 by creating jobs in health care, accommodation, and food service industries. MWBEs added 1.8 million jobs from 2007 to 2012, while businesses owned by white males lost 8000,000 jobs, and businesses jointly owned by white men and women lost another 1.6 million jobs.

Curiously, the increase in MWBE ownership seemed to be connected to higher unemployment rates for people of color, namely that unemployed people are more likely to start a business during a recession to avoid prolong unemployment and financial hardship.

As contrasted with the Great Recession of 2009, the current crisis puts food services, retail, and accommodation industries at immediate risk.

A chart prepared by the Brookings Institution, a nonprofit public policy organization based in Washington, D.C., and dating back to 1916, illustrated these findings, based upon U.S. Census data from 2016 showing the industries the most impacted by the pandemic and its accompanying shutdowns. 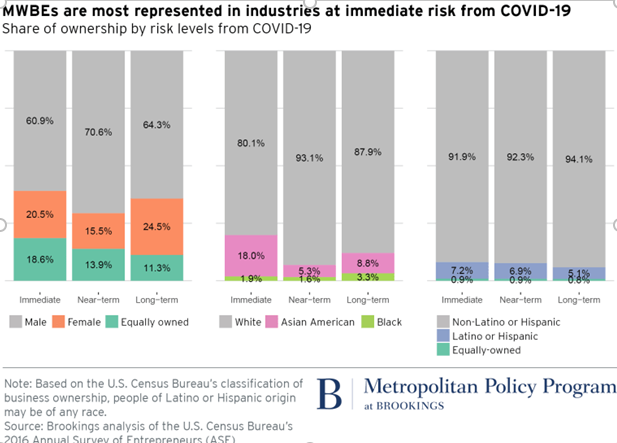 MWBEs tend to be younger companies, with 45% in business for five years or less, compared to 31% of white-owned business, and 40% more likely to rely on personal funds, mainly home equity, to finance their companies. Roughly 22% of all women-owned businesses are hair salons, nail salons, and pet groomers, and women also own 16% of the business in the hospitality and food service sector.

In this current crisis, the U.S. Congress authorized the Paycheck Protection Program (PPP) and Economic Injury Disaster Loans (EIDLs) from the Small Business Administration. Large banks primarily managed the PPP funds, which have gone mostly to bank customers, which disproportionately do not include MWBEs. Historically, banks approve 60% of loans sought for white small business owners, 50% for Latino owners, and 29% for Black owners. Black business owners made more use of funding from Community Development Financial Institutions, which focus on lending in poor areas:  17% compared to 3% for Latinos and 3% for Whites.

Past economic downturns prompted higher male unemployment in industries like manufacturing and construction. Unemployment among men reached 11.1% in 2009, compared with a peak of 9% for women in 2010. In May 2020 unemployment among women was 16.2% compared to 13.5% for men, and 14.7% overall compared to 4.4% pre-pandemic, according the U.S. Department of Labor.

The pandemic varies from other downturns since women and minority unemployment rates, concentrated in service industries, are higher than men. Women tend to be in public facing positions and therefore more apt to be furloughed or laid off. For example, about 11% of healthcare workers are women compared to 3% of men.

Remote work and closed schools combine to exacerbate the impact of COVID-19 on female professionals. As they dominate service industries, they disproportionately handle household and childcare responsibilities. Jobless women spend more than eight hours a day on unpaid household and care work, compared with less than three hours for men, according to a study by the Institute for Women’s Policy Research.

During the pandemic, a survey conducted by the Boston Consulting Group found that on average women were spending 15 hours more a week on domestic labor than men were, at 65 hours versus 50 hours, compared with a pre-pandemic balance of 35 hours and 25 hours.

Opening economies without schooling and childcare is a “recipe for a generational wipeout of mothers’ careers,” said Joan Williams, a professor at the University of California Hastings College of the Law and the founder of the Center for WorkLife Law.

According to the U.S. Census bureau, in 2018, about 70% of husbands in dual-income heterosexual couples earned more than their wives, which causes women to sacrifice their careers.

Things won’t change anytime soon—schools are either hybrid or 100% remote, so businesses should adapt to this new reality. The Boston Consulting Group had four suggestions: communicate, prioritize and be flexible; give working parents the accommodations they need; factor caregiver status into talent evaluations and track impact; and lead with empathy.

Women and minority business owners and professionals face worse conditions during the pandemic compared to previous recessions. Initiatives aimed at helping them include the increased use of technology, policy changes regarding work and educational environments, and social justice changes affecting minorities and women.

There also is a silver lining in the form of additional financial relief from the federal government, including another round of PPP, SBA EIDL loans, and temporary cancellation of payroll taxes.  There are private resources to assist MWBEs.19

Will history repeat itself? Like the recovery after the recession of 2009, will small businesses grow again? We now wait and see if the mightiest of smallish businesses survive, and develop, and if MWBEs lead the economic recovery post-pandemic.