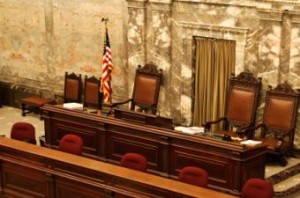 Wells Fargo Chairman and CEO John Stumpf sat before the Senate Banking Committee on Tuesday and profusely apologized for the controversy that has rocked all sectors of the financial industry in the last two weeks.

On September 8, the Consumer Financial Protection Bureau (CFPB), the Office of the Comptroller of the Currency (OCC), and the Los Angeles City Attorney’s Office fined Wells Fargo a combined total of $185 million for opening approximately two million unauthorized credit card accounts without consumers’ knowledge in order to meet sales quotas. The bank has fired 5,300 employees over the last five years over the controversy.

Despite Stumpf’s apologies, the members of the Senate Banking Committee were less than kind during their statements and questioning at Tuesday’s hearing.

“While much has been written about these events, I believe there are several questions that warrant answers,” Senate Banking Committee Chairman Richard Shelby (R-Alabama) said in his opening statement. “First, when did this conduct start at Wells Fargo and why were the regulators unaware of this growing problem? Second, when did Mr. Stumpf and his senior management become aware of these activities and how did they respond? Third, have all of the appropriate Wells Fargo employees been held accountable and to what extent? Finally, where were the federal regulators while certain Wells Fargo employees were taking advantage of unsuspecting customers over a period of many years? Here is what we do know—Wells Fargo’s internal review only covers unauthorized accounts dating back to 2011. News reports and court documents suggest these problems might have existed long before then.”

Comptroller of the Currency Thomas Curry said in his testimony that “I want to make clear that the unsafe and unsound sales practices at the Bank, including the opening and manipulation of fee generating customer accounts without the customer’s authorization, are completely unacceptable and have no place in the federal banking system. They reflect a lack of effective risk management, a breakdown in controls, and an inappropriate incentive structure. The actions announced on September 8, 2016, are intended to remediate and deter such practices and underscore the importance of robust risk management throughout the federal banking system.”

According to CFPB Director Richard Cordray's testimony at the hearing, “The gravity and breadth of the fraud that occurred at Wells Fargo cannot be pushed aside as the stray misconduct of just a few bad apples. As one former federal prosecutor has aptly noted, the stunning nature and scale of these practices reflects instead the consequences of a diseased orchard.”

In his testimony before the Committee on Tuesday, Stumpf—who has worked for Wells Fargo for 35 years—did not attempt to pass the blame.

Stumpf continued, “I accept full responsibility for all unethical sales practices in our retail banking business, and I am fully committed to fixing this issue, strengthening our culture, and taking the necessary actions to restore our customers’ trust. I want to make it very clear that we never directed nor wanted our team members to provide products and services to customers that they did not need or want. That is not good for our customers, and it is not good for our business. It is against everything we stand for as a company.”

In his testimony, Stumpf outlined a number of key actions the bank has taken to ensure that its goals are aligned with customers’ best interests. Those actions include eliminating product sales goals for Wells Fargo’s retail banking business; and sending a confirmation email to customers within an hour of opening a new account and sending a letter of acknowledgement to customers after they submit a credit card application.

Senate Banking Committee Ranking Member Sherrod Brown (D-Ohio) was critical of the bank’s reaction to the controversy, however, stating that while Stumpf claimed accountability, the bank’s actions did not indicate such.

“Wells Fargo claims to have made things right with its customers,” Brown said in his opening statement. “But its efforts have been incomplete—for example, it’s not clear that PwC calculated the cost of a lower credit score, which might be paid every month for 30 years. And at times, the bank has been downright hostile to aggrieved customers.”

Brown also claimed that the 5,300 deposed employees were held accountable for the bank’s actions while at the same time he believes the bank’s executives were not.

“Ms. Carrie Tolstedt, the Senior Executive Vice President for Community Banking, has done quite well,” Brown said. “She knew of this problem at least five years ago, and is retiring with a package that may be worth more than the CFPB’s record fine of $100 million dollars. So 5,300 team members, earning perhaps $30,000 a year, have lost their jobs, while Ms. Tolstedt walks away with $100 million, give or take.”

Perhaps the least kind of all the Senate Banking Committee members was prominent Wall Street foe Elizabeth Warren (D-Massachusetts), who one week after the Wells Fargo controversy broke petitioned the Department of Justice Inspector General to conduct an investigation of the DOJ for the Department’s lack of prosecutions of individuals over potential law-breaking related to the financial crisis in 2008.

“This is about accountability,” Warren said in grilling Stumpf on Tuesday. “You should resign, you should give back the money you took while this scam was going on and you should be criminally investigated by both the Department of Justice and the Securities and Exchange Commission. The only way that Wall Street will change is if executives face jail time when they preside over massive frauds. Until then it will be business as usual, and at giant banks like Wells Fargo, that seems to mean cheating as many customers, investors and employees as they possibly can.”

When reached by email, a Wells Fargo spokesperson told MReport that the bank had no comment on Warren’s questioning, but did note that Stumpf “apologized to and took accountability for letting down our customers, our team members and the public. He also laid out a proactive plan for strengthening the culture of Wells Fargo’s retail bank and for regaining the trust of our customers, our shareholders and the American people.”

Previous: Optimism Reigns Despite Dropoff in Housing Starts
Next: What is Driving Existing-Home Sales Potential Upward?