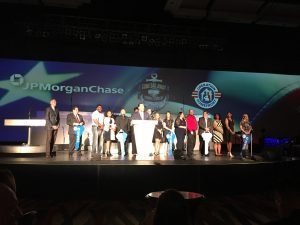 The Five Star Conference Expo Hall opened Tuesday morning, bringing lenders, servicers, and a number of other mortgage professionals under one roof.

Include, the 2017 conference theme, was a topic widely discussed at the DS News and MReport booth where attendees explained its importance.

“We like the networking opportunities and being able to connect with different companies from a strategic standpoint,” Kiyoshi Hunt, SVP of ZVN Properties said. “We can meet a lot of the needs our clients have, and maybe uncover some things we didn’t know, and learn about different perspectives.”

Tim Rath, Director of Supply Chain and Vendor Management from Safeguard Properties also enjoyed the camaraderie and diversity of the Expo Hall.

John I. Pray, Jr., Brig Gen, USAF (Ret). Pray, President and CEO of Operation Homefront, a national nonprofit whose mission is to build strong, stable, and secure military families, had a chance to stop by the DS News and MReport booth in the expo hall to discuss many attendees favorite event of the conference: the Military Heroes Keys for Life Dinner and Concert where Operation Homefront and the Five Star Institute present five military veterans with a mortgage-free home followed by a concert from rock band Styx.

“It means the world to be able to do this,” Pray said. "When you think about it from their perspective it is literally life-changing. It will give them the firm foundation upon which to build a very bright future."

"I will not stop until we have no homeless vets,” said Frieden.

Previous: What Are the Biggest Barriers to Homeownership?
Next: Veros Introduces UCD-compliant Solution