Despite sitting at a considerably lower rate than at this time last year, demand for housing appears to be on its way up, according to data released by Redfin on Tuesday.

Nationwide demand for housing ticked up for the second straight month in August to an adjusted level of 93, or 1.7 percent higher than July’s seasonally-adjusted rate, according to Redfin’s Housing Demand Index for August 2016. The index, which is based on thousands of customers requesting home tours and writing offers, has a benchmark of 100, which represents the three-year historical average from January 2013 to December 2015.

Homebuyer demand declined over-the-year by nearly 18 percent in August, representing the seventh consecutive month of such declines. But the monthly gains in July and August were encouraging.

“Now we're seeing the market catch a new breath after pausing briefly this summer,” said Redfin chief economist Nela Richardson. “Buyer demand strengthened for the second month in a row, signaling that the market has some wind in its sails going into the fall. At the same time, the 2016 home-buying season has been less ferocious than it was the past three years. Bidding wars are a tad less frequent, price growth is moderating and even in hot markets homes are sitting on the market a bit longer. All told, this is not a market in decline, it's a market finally finding its normal.”

A surge in offers on homes (up 9.8 percent over-the-month) drove the increase in demand, which would have been higher had the number of customers requesting tours not declined by 3.6 percent, according to Redfin. 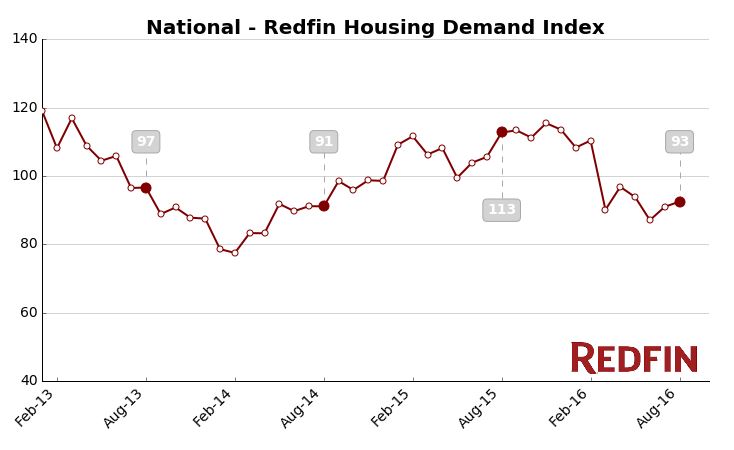 The increasing demand for homes is having trouble being met, as there are not enough homes available on the market for the large pool of potential buyers to choose from, Redfin reported. Inventory has been an issue in the housing market for several months, and August was no exception. August saw a 9.4 percent decline in inventory over-the-year across the 15 markets covered by Redfin’s Demand Index, marking the 15th consecutive month of over-the-year inventory declines.

“Buyers aren’t as interested as they have been,” said Michelle Ackerman, Redfin real estate agent in Denver. “Noticeably fewer buyers are touring each listing and showing up at open houses, especially for homes over $400,000. For example, homes that would have gotten about 30 showings in a weekend earlier this year are getting just a handful. Yes, there still aren’t many homes for sale, but the frenzied activity over new listings has come to a screaming halt, in part because a lack of licensed appraisers are adding weeks to closing times.”

Previous: Appreciation Pace ‘Probably Not Sustainable’. . . But Have No Fear
Next: Some Markets are Failing Another Type of Stress Test