Repeat Homebuyers Are Stuck in Neutral

First-time homebuyers have fared well in the last decade as far as market share. Repeat homebuyers, not so much.

Repeat homebuyers are stalling, having trouble getting out of their starter homes and into that larger or more expensive home that usually comes as a result of equity built up in the starter home and greater earning power.

A study from the Urban Institute’s Housing Finance Policy Center (HFPC) on Wednesday found that first-time buyers with agency purchase loans have had an increased market share in housing since the crisis (53 percent since 2008) compared to the years immediately preceding the crisis (48 percent from 2001 to 2007). The number of first-time buyers in 2001 (1.3 million) was the same as it was in 2015, and stayed around that number in between.

A tighter credit box and home prices in some markets have yet to recover to pre-crisis levels may have had an effect on repeat homebuyers’ ability to get out of their starter homes. Authors Laurie Goodman, Sheryl Pardo, and Bing Bai of the Urban Institute’s HFPC note, however, that starter homes are easier to acquire because saving for a down payment for what is typically a more inexpensive home is often feasible for a buyer with reliable employment—despite the tighter credit box.

But the basic strategies in buying a starter home and a second (or third) home are quite different, according to the authors. The basic strategy for buying a starter home is to establish strong credit, have stable income, and save money for a down payment. For a larger second home, however, the object is to accumulate equity through price appreciation and convert the equity into a down payment. 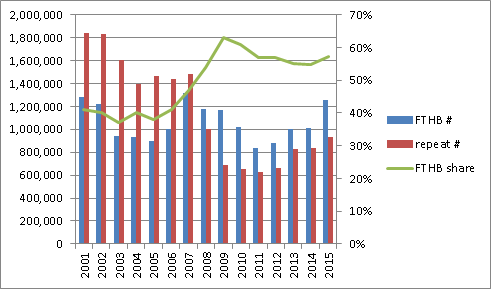 Whereas the lower, not-yet-recovered home prices can make a home more affordable for a first-time buyer, the lack of price appreciation can hinder the chances of a potential repeat buyer that is trying to build equity.

“Traditionally, borrowers could afford the higher payments on the larger mortgage because their incomes were rising,” the authors state. “But falling home prices during the financial crisis have eroded this equity, and most homes are worth less than their 2007 peak: Home values nationwide must still increase by 6.5 percent to reach peak values. Real incomes have been flat since the mid-1990s, and credit standards are tight, further limiting trade-up activity.”

It is not first-time buyers who are struggling, said the authors, but rather “It’s the homebuyers who bought before the boom and hoped to cash in on price appreciation to trade up to their dream home who are struggling these days. While their numbers are rising, we do appear to have a generation stuck in their starter homes.”

Previous: HUD Fair Housing Rule Grants: Not Everybody Wants Some
Next: CalyxSoftware ASCEND16 Conference to Include Top Regulators and Agencies