Industry stakeholders have been pondering for a couple of years how to make homebuying easier for millennials, which have been cited by many market analysts as the key demographic for increasing the dismal homeownership rate.

The answer may lie within the down payment, which has often been cited as the biggest obstacle to purchasing a home for all demographics—particularly for millennials. Many government agencies and lenders are offering low down payment options in order to get more first-time buyers into homes, and it seems to be working: A survey of more than 750 Redfin real estate agents found that a homebuyer does not necessarily have to shell out a 20 percent down payment in order to be successful. 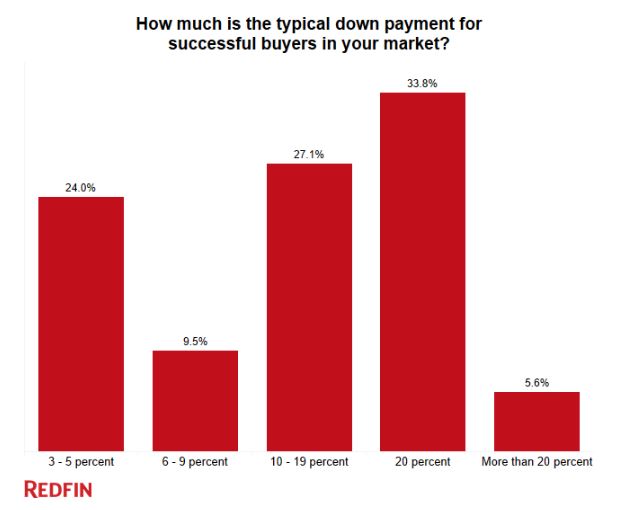 “The conditions that challenged first-time and millennial homebuyers this spring are starting to ease,” said Redfin chief economist Nela Richardson. “There are fewer bidding wars and less of a need to escalate significantly above the list price to get an offer accepted. The pace of the market is also slowing, which helps buyers since they can now afford to be patient.”

Another factor making conditions more favorable for first-time buyers is the slowly declining share of residential home purchases made with all cash, which is a good indicator of investor activity in the market. CoreLogic reported that in June 2016, the cash sales share dropped below 30 percent for the first time in nine years (29.3 percent) and is down significantly from its January 2011 peak, when nearly half (46.6 percent) of all home purchases were made using all cash. If its current rate of decline continues, CoreLogic expects the cash sales share to hit its pre-crisis “normal” of 25 percent by mid-2018.

A decline in investor activity indicates that more traditional buyers are coming into the market, according to Redfin.

“Sellers are getting used to the idea that all-cash buyers and investors have given way to traditional buyers who need financing to purchase a home,” Richardson said. “They are demanding less from buyers than they were just a few months ago, which means a wider spectrum of buyers and down payments can be successful now.”

Tagged with: Down Payment Homeownership Millennials

Previous: Market May Be Primed for Origination Spike
Next: House to Stumpf: Investigation is Only Beginning