Pending home sales cooled off in August for the third time in four months, and it could be a sign of a stalling housing market, according to the National Association of Realtors [1] (NAR).

According to Lawrence Yun, chief economist at NAR, evidence is piling up that without more new home construction the current housing recovery could stall. While housing slowed in August and even reached its lowest point since January, housing inventory has declined year-over-year for 15 straight months.

Time on the market is shrinking, though, and prices are growing. While that sounds good, it signals a choking due to limited inventory. According to NAR, properties in August typically sold 11 days quicker than in August 2015 and after increasing 5.1 percent last month, existing-home prices have risen year-over-year for 54 consecutive months.

“There will be an expected seasonal decline in new listings in coming months, which could accelerate price appreciation and make finding an affordable home even more of a struggle for would-be buyers,” Yun said. “Contract activity slackened throughout the country in August except for in the Northeast, where higher inventory totals are giving home shoppers greater options and better success signing a contract.”

Overall, NAR’s Pending Home Sales Index (PHSI) declined 2.4 percent to 108.5 in August. That’s also slightly lower (0.2 percent) than August 2015. The Northeast index did rise, by 1.3 percent to 98.1 in August. That’s 6 percent above a year ago. In the Midwest the index decreased 0.9 percent to 104.7 in August, and is now 1.7 percent lower than August 2015. But the Midwest, South, and West all dropped noticeably. The West suffered most, with a 5.3 percent decline in August. 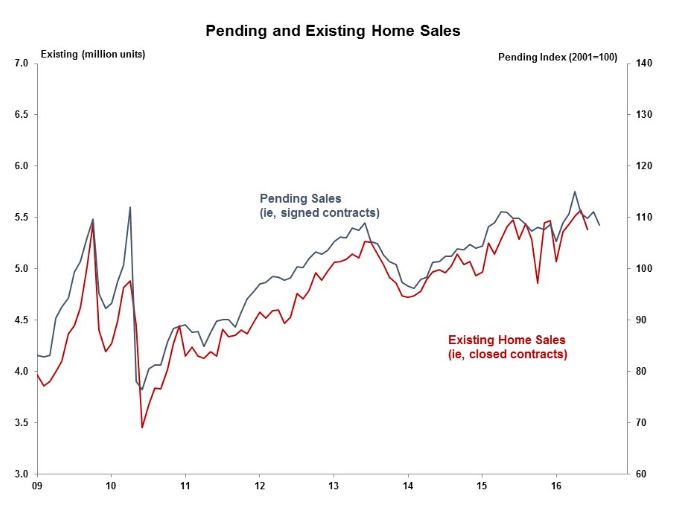 Earlier this month, NAR released a new study [2] that revealed single-family home construction is not keeping pace with job creation and is lacking overall in 80 percent of measured metro areas. When combined with the scant supply levels for existing homes, these tight inventory conditions continue to hamper affordability in many of the largest cities in the country—especially those in the West.

“Given the current conditions, there's not much room for sales to march again towards June's peak cyclical sales pace,” said Yun.

The lack of available residential housing inventory has been well-documented for the last several months. But while NAR cautions that a lack of new construction may hinder housing’s recovery, some analysts noted that the August pending sales report along with other recent macroeconomic measures may be a good sign for housing.

“[B]uilder confidence [3] surged in September along with consumer confidence [4],” said Stephen Melman, Director of Economic Services with the National Association of Home Builders [5]. “Also, August new home sales recorded their second strongest month since the Great Recession. These reports suggest good news for new construction as the housing recovery continues to address demand among first-time buyers and broaden across a wider range of markets during the balance of 2016.”