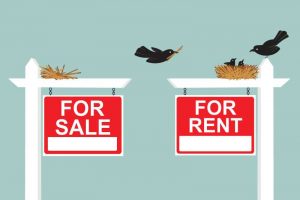 A new Zillow survey of 107 housing market experts and economists found one common thread where all respondents agreed: sellers will relinquish the recent control they have had over the market and buyers will take the reins.

According to Zillow’s latest Home Price Expectations Survey, the overall takeaway is that buyers will return to power in 2023 due to the confluence of decelerating home prices, rising interest rates, and the ever-present threat of inflation.

Home value growth hit record highs shortly after pandemic, but is now slowing as affordability is becoming a problem for many. Typical home values are ticking down slightly across the U.S. and declining more steeply in some of the most expensive metros, as well as those that grew the fastest over the past two years.

But now, the market is calming as buyers become less anxious about finding a new pandemic home. Inventory is up (although still down 42% compared to 2019), while a listings’ typical time on the market is now 11 days. The majority of respondents (56%) expect a significant shift in buyers’ favor by sometime next year. Another 24% predicted that shift would come in 2024, 13% pointed to 2025, and just 8% expect it after 2025. 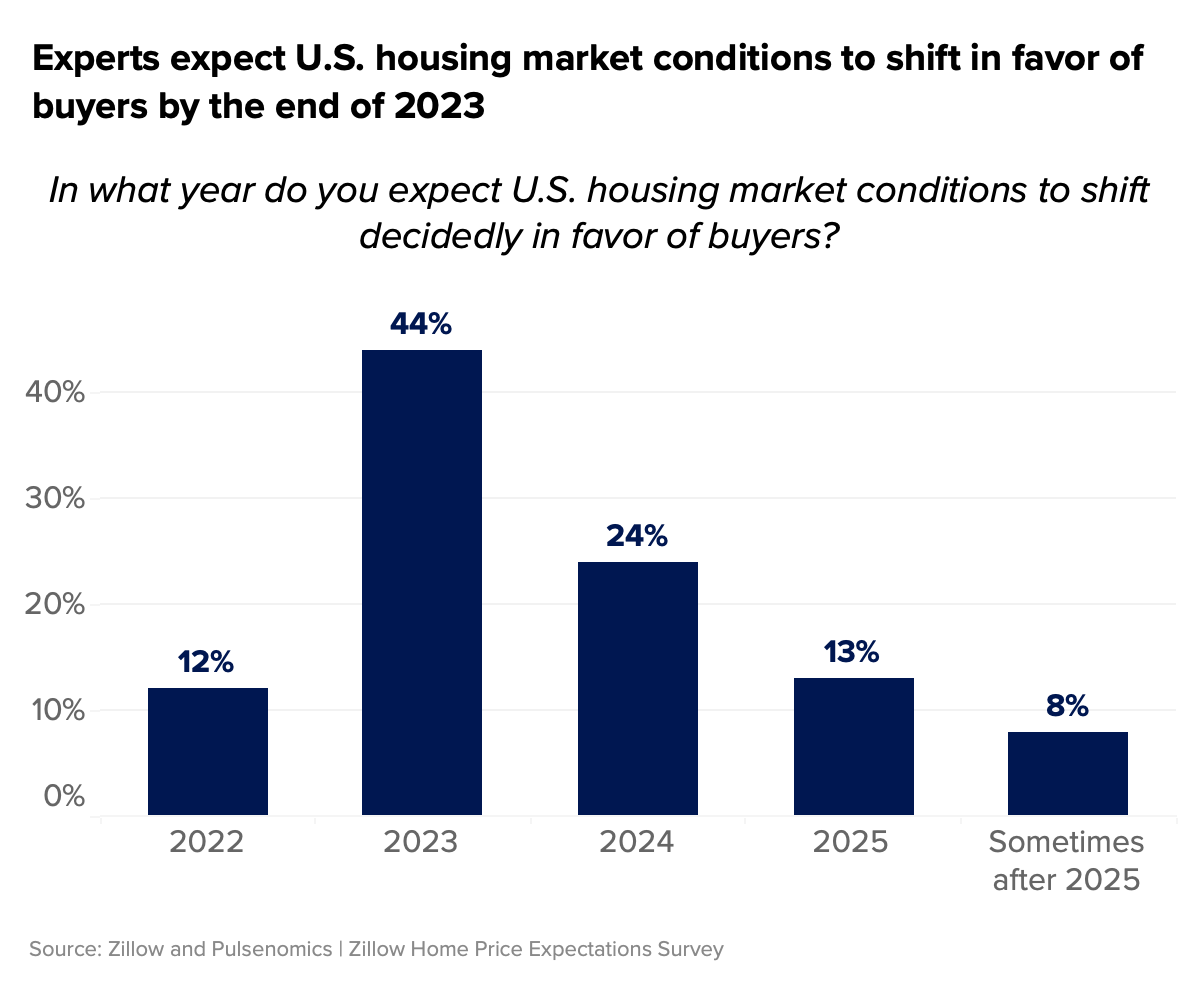 "After the frantic rush for real estate over the past two years, buyers are finally seeing a calmer market. Those still able to afford homeownership are quickly regaining lost leverage, but this shift to a more balanced market is still in its early stages," said Nicole Bachaud, Senior Economist at Zillow. "Home shoppers priced out of the market are in a tight spot, though, as high and rising rents could cut further into their ability to save up for a down payment."

Zillow went on to say that inexpensive Midwest markets—such as Columbus, Ohio, Indianapolis, and Minneapolis—are the least likely to see home prices decline over the next 12 months, according to survey respondents. Fast-growing markets in the South, like Atlanta, Nashville, Tennessee, and Charlotte, North Carolina, are also expected to retain their heat. Markets projected to cool the fastest are those that saw some of the largest growth over the course of the pandemic, including Boise, Austin and Raleigh.

The experts also predicted that areas around “vacation area” or resorts are the most likely places to see price declines going forward. 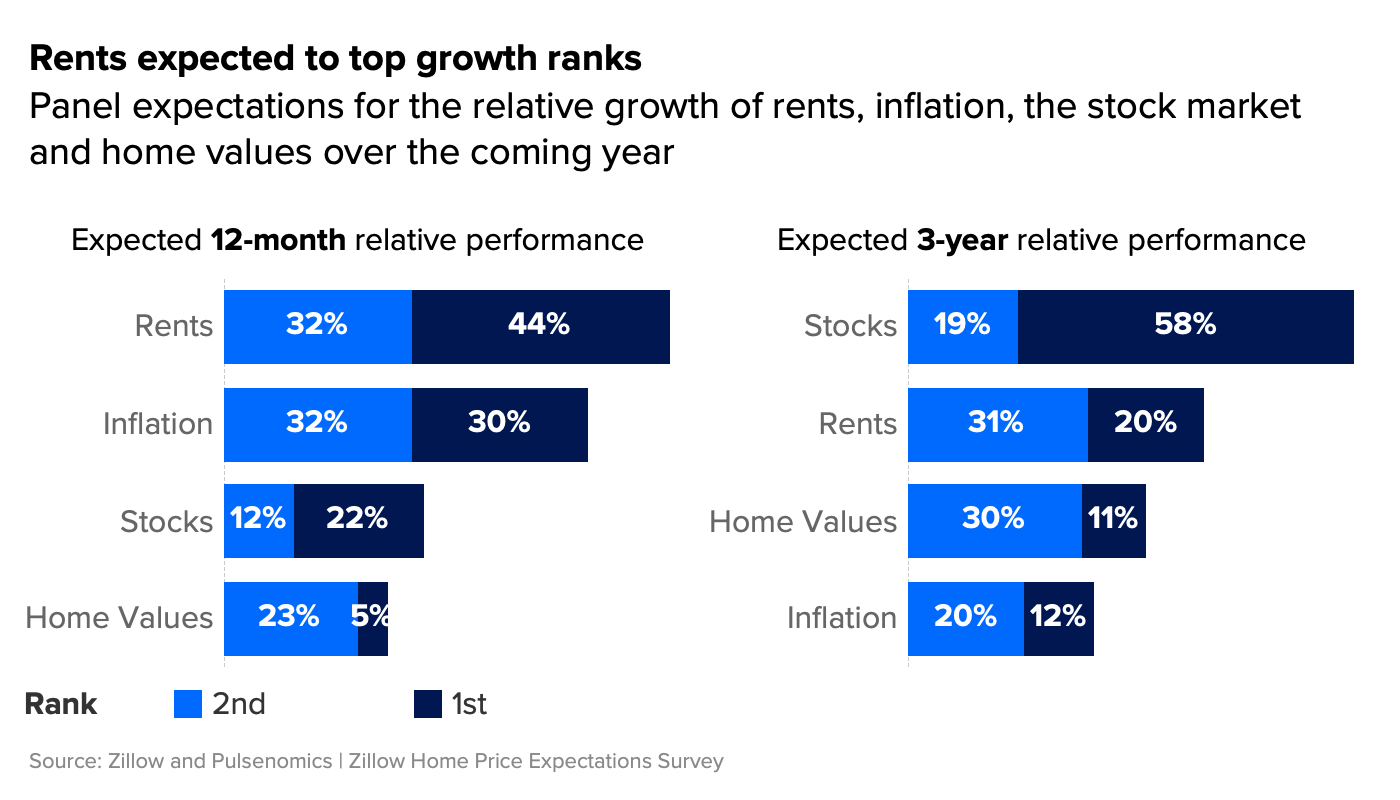 Additionally, respondents expect rent price growth to outpace inflation during the next 12 months, as price-out home buyers resort to renting, either by circumstance or choice, as their primary mode of housing.

All-in-all, respondents predict that rent will grow by an average 5.4% through the end of 2023, lower than the 8.6% annual growth they expect to see by the end of this year, but still higher than what Zillow data shows to be just under 4% annual growth in the years prior to the pandemic.

"U.S. home price appreciation is clearly easing up in response to the historic surge in mortgage rates," said Terry Loebs, Founder of Pulsenomics, who was contracted by Zillow to conduct the survey. "Our expert panel's mean projections indicate that residential rent price growth is expected to outpace headline CPI inflation over the coming three years and exceed home price growth through at least 2025. Despite softening house prices, this implies that affordability hurdles for prospective first-time homeowners will remain high and persist for years to come.”