Home >> Daily Dose >> Equity is On Tap, and Homeowners are Cashing Out

Equity is On Tap, and Homeowners are Cashing Out

More than half a million homeowners regained equity in the second quarter of 2016, bringing the total of homeowners with equity up to 47.2 million (about 93 percent of homes with a mortgage), according to the latest data from CoreLogic.

That decline represented a drop of $30 billion in aggregate negative equity in Q2. What are those homeowners doing with all that equity they have regained?

Many of them are cashing out their equity through refinancing, according to Black Knight Financial Services’ August 2016 Mortgage Monitor released Monday. Homeowners tapped out a total of $22.6 billion via cash-out refis in the second quarter, which was the highest total since Q2 2009.

“The roughly 350,000 cash-out refinances in Q2 2016 accounted for 42 percent of all refinances in the quarter, and marked the ninth consecutive quarterly increase in cash-out lending, not only by count, but also by the amount of equity tapped,” said Ben Graboske, Black Knight Data & Analytics EVP. “At $22.6 billion, that works out to approximately $65,000 in equity tapped per borrower. While that per-borrower number is slightly down from Q1 2016—but $6,000 higher than one year ago—the $22.6 billion total is the largest equity sum tapped since Q2 2009.”

Though the number of cash-out refi loans has increased over-the-quarter for nine consecutive quarters, they have a way to go before they reach pre-crisis levels. Approximately 42 percent of all refinances during Q2 2016 were cash-out refis, which is slightly more than half of the peak total of 80 percent in Q3 2005. What that comes down to is there is still a substantial amount of equity for homeowners to tap. 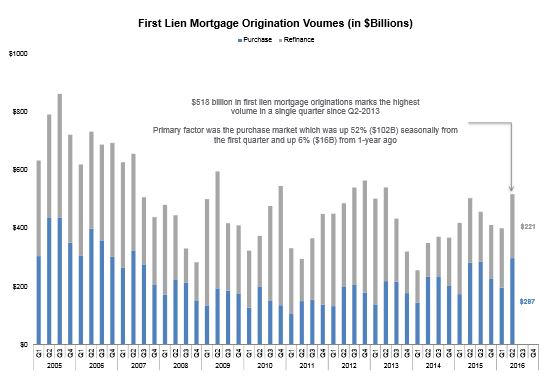 “[G]iven that we saw over $550 billion in tappable equity growth last year alone, this equates to borrowers only tapping into 15 percent of the growth in equity over the past 12 months, without even touching the $4.5 trillion balance in tappable equity available,” Graboske said. “All in all, it’s clear that cash-outs are helping to prop up the refinance market—their 42 percent share is up from only 30 percent in early 2015 when interest rates had also dropped.”

While there was a year-over-year decline in overall origination volume in Q2, those figures do not take into account the post-Brexit activity following the vote in late June. Following Brexit, the already-low mortgage rates fell even lower and have been at or below 3.5 percent for the last three months. Freddie Mac reported that the latest data showed that refi volume was up by 34 percent over-the-year.

“As of July, there’s now been 51 consecutive months of home price appreciation, which has corresponded to significant growth in equity across most of the country,” Graboske said. “In fact, U.S. homeowners with mortgages saw total tappable equity increase by over $550 billion over the last year alone, on top of the $4.5 trillion already outstanding in terms of available equity. When you combine that with historically low interest rates, it’s not surprising at all that borrowers would look to tap some of this newfound equity, and right now, for many of them, cash-out refinances represent the most prudent way of doing so. What’s more, the smart money borrowers realize that these low rates won’t last forever, and they want to capitalize on the opportunity while it still exists.”

Homeowners who have purchased their homes since the crisis are getting in on the refinancing action, too, according to Black Knight. Nearly three-quarters (73 percent) of mortgage refinances as of the end of Q2 went to borrowers with mortgages that were originated in 2009 or later.

Click here to read the complete Mortgage Monitor for August 2016.

Previous: The Week Ahead: Will the Labor Market Rebound?
Next: CSS Implements DocMagic’s Total eClose Solution