Home >> Daily Dose >> Is a Mortgage Rate Spike on the Horizon?

Is a Mortgage Rate Spike on the Horizon?

In spite of a spike in the 10-year Treasury yield, mortgage rates did not change over-the-week for the week ending on October 6, 2016, according to Freddie Mac’s Primary Mortgage Market Survey (PMMS) released Thursday.

The average 30-year fixed-rate mortgage (FRM) has remained below 4 percent since the Fed raised short-term interest rates last December for the first time in nine years. For the last three months, the 30-year FRM has been at 3.5 percent or lower. Thursday’s PMMS reported the rate at 3.42, same as the previous week, which is only 11 basis points higher than the all-time low set in November 2012. The average 15-year FRM was 2.72 percent, also unchanged from the previous week.

With the Treasury yield at its highest level in two weeks, is a corresponding spike in mortgage rates on the horizon? Maybe not.

“While the 10-year Treasury and mortgage rates do have a relationship, there's currently no reliable lockstep connection between them, as central bank stimulus programs across the globe are distorting markets and investor behaviors to a real degree,” said Keith Gumbinger, VP of HSH.com. “While it's to be expected that the recent rise in the TCM will firm mortgage rates up a little bit, the move probably won't amount to much... perhaps just a handful of basis points in the days ahead, lifting them a little off recent bottoms.” 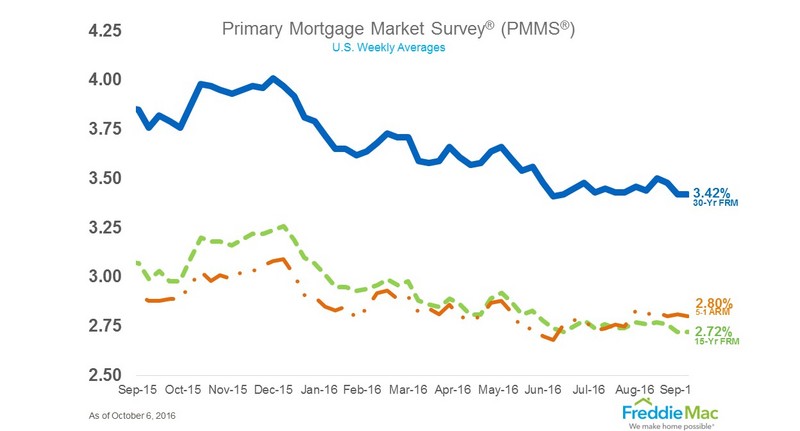 Another factor in the equation is the monthly employment situation from the Bureau of Labor Statistics. The job gains reported in August (151,000) fell short of expectations and were viewed as the main factor in the Fed’s decision not to raise short-term interest rates at their September policymaking meeting. September's employment summary will be published on Friday, October 7.

“The 10-year Treasury yield leaped to a two-week high following reports of the European Central Bank retreating from its bond-buying program ahead of its initial March deadline,” Freddie Mac chief economist Sean Becketti said. “In contrast, the 30-year fixed-rate mortgage remained unchanged at 3.42 percent. Over the past two weeks, mortgage rates have remained fairly flat while Treasury yields have fallen and risen. This Friday's jobs report will provide clarity on whether or not mortgage rates follow the recent upward trend in Treasury yields.”

According to Becketti, the tendency has been for mortgage rates to rise (or fall) with Treasury yields—but it may take a while.

Previous: Altisource Residential: SFR Purchase is a ‘Transformative Transaction’
Next: Looking Back, and Ahead, at TRID