Homeowners are overestimating the value of their homes, though not by much.

In September, according to Quicken Loans [1], values were 1.26 percent less than what homeowners estimated. This is down from the 1.56 percent gap in August.

Quicken’s home value index found that home values dropped 0.28 percent from August to September, but increased by a robust 7.78 percent since September 2015. The drop in values comes after four straight months of increases.

The West and South made small gains, with a 0.31 percent growth each. However, appraised values fell in both the Midwest and Northeast, 2.23 and 1.42 percent respectively. However, despite the monthly variations, all regions reported increasing annual growth in home values ranging from 5.52 percent growth in the Northeast to an 8 percent rise in the West

“This small decrease in home values is not a signal of a turning tide, it just shows the volatility that can come with changing seasons,” said Quicken Loans chief economist Bob Walters. “As the summer came to a close, the intense competition for available homes began to abate and home values dipped as a result. It’s important to focus on the annual picture. The strong yearly growth negates monthly changes and shows we are moving in the right direction.”

The fastest growing markets in September were Denver, San Francisco, and San Jose, where appraised values were actually higher than what homeowners estimated, all above 2 percent. On the flipside, in Philadelphia, Detroit, and Baltimore appraisals were lower (all about 3 percent) than what homeowners believed they would be.

“When reading about the health of the economy, many consumers don’t take into account how varied housing markets can be,” Walters said. “If a homeowner in Philadelphia hears about the housing boom out west, they could be surprised when their home doesn’t sell at the price they thought it would. I encourage homeowners to work with real estate agents, lenders and other experts to determine their home’s value.” 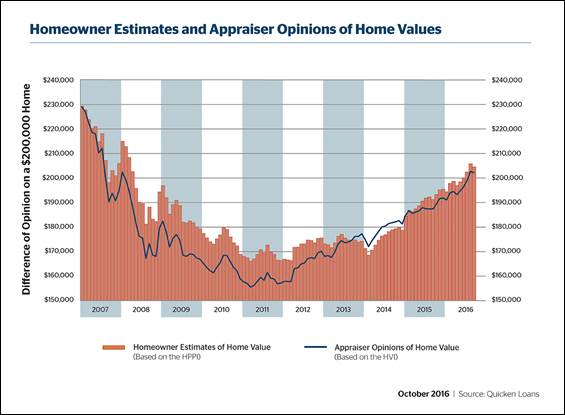