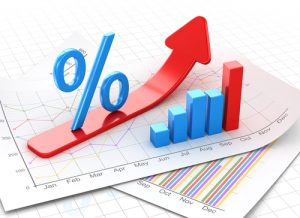 An analysis by Zillow reveals that U.S. homebuyers’ cost-of-living has gone up across the country since the beginning of the calendar year. Moreover, Zillow found that two-thirds of this increase coincided with hikes in the federal interest rate, which in turn have driven up monthly mortgage payments.

Mortgage payments for the average home have risen 15.4 percent in comparison to August 2017. The median home value has also risen—but only by 6.5 percent in the same period. If someone is planning to buy a median-priced home today, they can expect their monthly mortgage payments will be $118 higher than a year ago, or $1,416 per annum. This increase in the average mortgage payment is indicative not only of increased home values but also of higher interest rates for those in the market to buy.

Beginning in 2018, mortgage rates have risen steadily from the historic lows they fell to after the Great Recession. The average mortgage rate at the beginning of 2018 was close to 4 percent, and since that time has climbed almost a single percentage point (about $1,200 per annum), having reached 4.9 percent in the early weeks of October 2018. With the U.S. economy exceeding expectations, economic data indicates mortgage rates will continue to trend upward alongside the Federal Reserve’s interest rates. The Fed has raised the interest rate three times this calendar year, and current projections have them doing so five more times before the start of 2020.

Home value appreciation, however, has lagged behind mortgage rates after hitting a high in March 2018 of 8.2 percent. These reduced hikes in price may seem advantageous to buyers, but the increase in mortgage rates—more than double the rate of home value increases—offsets benefits homebuyers may have accrued if interest rates weren’t rising.

"For most of the current economic expansion, mortgage rates have remained just off historic lows even as the American economy has accelerated," said Aaron Terrazas, a Chief Economist with Zillow. "We're finally starting to see typical patterns asserting themselves in the housing market, and conditions are returning to more of what we would expect in a normal economy. Home buyers and sellers have become accustomed to low rates, and there will be a bit of an adjustment period as the market adapts. Looking ahead, the impact of higher rates may slow the pace of home value growth, particularly in the nation's priciest markets. Buyers will face higher financing costs, but also could benefit from somewhat less frenetic competition."