The National Association of Home Builders (NAHB)/Wells Fargo Housing Market Index (HMI) released Tuesday reported a decline of two points down to 63 from September to October, indicating that builder confidence in the single-family housing market is slightly lower than a month ago but remains at a solid level in spite of market headwinds such as lot and labor shortages.

Despite the two-point decline in October, the HMI is at its second-highest level for any month in 2016. In September, the HMI shot up to an 11-month high of 65 from its August reading of 59 amid solid job growth, near record-low interest rates, and strong single-family housing demand.

The headwinds currently facing the market should not slow the growth of single-family housing for the near term, the NAHB Chief Economist Robert Dietz said. In fact, the component of the HMI measuring sales expectations in the next six months inched up by a point to an already elevated level of 72, indicating that builder confidence in sales remains high. 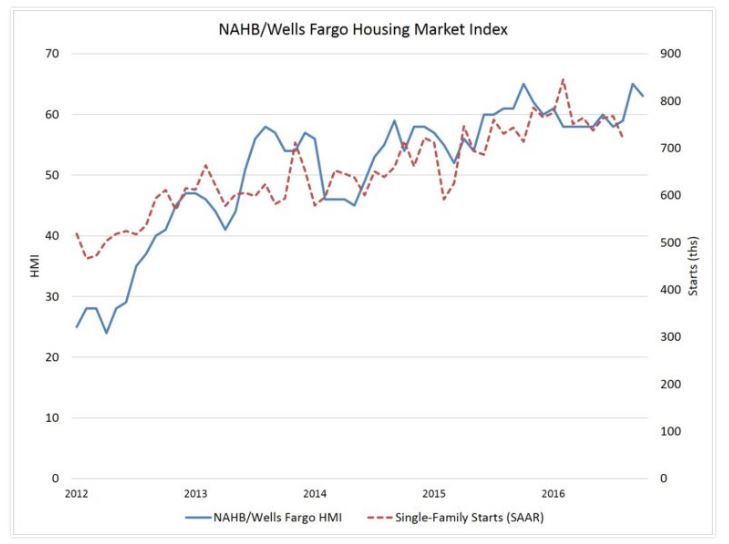 “Builders in many markets continue to express concerns about shortages of lots and labor,” Dietz said. “Mortgage rates remain low and the HMI index measuring future sales expectations has been over 70 for the past two months. These factors will sustain continued growth in the single-family market in the months ahead.”

Aside from the lot and labor shortages, key building materials such as ready-mix concrete and oriented strand board (OSB), remained near historically high levels in September, according to the latest Producer Price Index (PPI) released by the Bureau of Labor Statistics. The cost of OSB rose by 2.5 percent in September and is at its highest level in more than three years; the cost of ready-mix concrete dropped slightly in September but has climbed by 20 percent over the last five years.

Whereas all three components of the HMI posted a gain of at least four points from August to September, the only component that increased from September to October was the sales expectations for the next six months. The components of the HMI that measure current sales conditions and buyer traffic both declined in October by two points down to 69 and by one point down to 46, respectively.

Previous: Here is One Reason for the Single-Family Rental Boom
Next: MCS Expands Services With Acquisition of Lenders Title Solutions