Existing-home sales bucked a two-month trend in September, propelled by sales from first-time buyers. The National Association of Realtors said [1] that existing sales jumped 3.2 percent to a seasonally adjusted annual rate of 5.47 million in September.

After last month's gain, sales are at their highest pace since June (5.57 million) and are 0.6 percent above a year ago. However, according to Trulia [2], existing-home sales are still 16 percent below their pre-recession average.

“The home search over the past several months for a lot of prospective buyers, and especially for first-time buyers, took longer than usual because of the competition for the minimal amount of homes for sale,” said Lawrence Yun, NAR chief economist. “Most families and move-up buyers look to close before the new school year starts. Their diminishing presence from the market toward the end of summer created more opportunities for aspiring first-time homeowners to buy last month.”

The median existing-home price for all housing types in September was $234,200, up 5.6 percent from last September. This marks the 55th consecutive month of year-over-year gains. Conversely, though total housing inventory at the end of September rose 1.5 percent to 2.04 million existing homes available for sale, that’s 6.8 percent lower than a year ago. This marks the 16th straight month of year-over-year decreases.

“Inventory has been extremely tight all year and is unlikely to improve now that the seasonal decline in listings is about to kick in,” Yun said. “Unfortunately, there won't be much relief from new home construction, which continues to be grossly inadequate in relation to demand.”

“There's hope the leap in sales to first-time buyers can stick through the rest of the year and into next spring,” Yun said. “The market fundamentals—primarily consistent job gains and affordable mortgage rates—are there for the steady rise in first-timers needed to finally reverse the decline in the homeownership rate.” 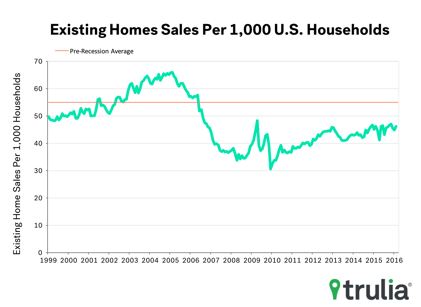 “Existing sales are slow to come back because of persistent low inventory,” said Ralph McLaughlin, chief economist at Trulia. “The number of homes on the market fell yet again in September, dropping 6.8 percent year-over-year. However, inventory still looks bad when controlling for seasonality and the number of households in the U.S.”

Taking seasonality and the number of U.S. households into account, McLaughlin said, existing inventory rebounded slightly from record lows in August, but it’s still the second lowest on record.

Regionally, existing-home sales in September had their biggest leap in the Northeast, up 5.7 percent over August. The West, up 5 percent, was a close second. Even the weakest area, the South, was up in September (by nearly a percent).

“Though the supply of homes for sale remains pretty limited, buyers now face less competition in the traditionally slower fall market, which means that more first-time buyers are finally landing homes,” Realtor.com Chief Economist Jonathan Smoke said. “This is just the beginning of the return of the first-time buyer. We could see substantial growth in this segment of the market if the economy continues to grow and mortgage rates rise only gradually, potentially driving overall market growth.”