Several years after the Great Recession, taxpayers remain on the hook for Fannie Mae and Freddie Mac, and the federal government is still trying to determine a way to make the GSEs self-sustaining—without increasing the risk for another bailout.

That’s the gist of a policy analysis out this week from the Congressional Budget Office [1], an independent nonpartisan agency tasked with reviewing the impacts of congressional legislation.

The CBO went with an illustrative outlook that focused less on any wish to restructure the housing market and more on what it would look like to shore up Fannie and Freddie.

Under one policy, the federal government could allow the GSEs to keep to $50 billion of its profits over the next decade.

If needed, the government could step in to buy more senior preferred stock from Fannie and Freddie to ensure the two companies maintain a positive net worth, the CBO said.

They could also raise their income with returns secured by investing these profits in Treasury securities, according to the report. 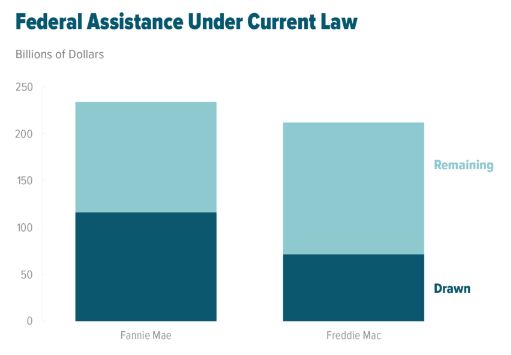 All of this would increase the federal government’s explicit backstop relative to the GSEs’ retained earnings, reduce the likelihood that Treasury would need to buy additional shares of preferred stock in the future, and result in a budgetary cost of about $10 billion.

Under an administration treatment, the CBO said these policy options went as high as $85 billion over 10 years.

Members of Congress have floated a number of legislative bills intended to restructure the GSEs and their role in the U.S. housing market, but as yet Fannie and Freddie remain in federal conservatorship.

Click here [1] to view the complete report from the CBO.