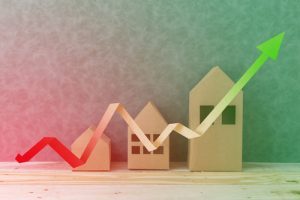 The Federal Housing Finance Agency House Price Index (HPI) [1]found that home prices in August rose slightly by 0.2% and are 4.6% higher than they were in August 2018.

The previously reported 0.4% increase for July 2019 is unchanged.

All regions posted year-over-year increases, but the New England region’s price was unchanged at 5%.

The Pacific region saw the largest drop in price growth, falling from 7.1% to 3.9% in August 2019. Price growth in the South Atlantic region fell from 7% to 4.2% and the Mountain region saw growth slow to 6.5% from last year’s 9% increase.

Home prices in the Pacific region, most notably in California, are the highest in the nation. In LendingTree study [2]found that one could by 23 median-priced homes in San Francisco for the price of one home in the Golden Gate City at $1.19 million.

Homeowners who sold their homes during the quarter earned an average profit that rose to a post-recession high of 34.5%, which is an increase from the prior quarter’s 34.4% and 34.3% in Q3 2018.

“The seven-year U.S. housing boom is back in high gear. After a series of relatively small price increase quarters, home prices saw quite the uptick, seller profits rose and the problem of distressed sales continued to fade, helping to make the third quarter the strongest in four years,” said Todd Teta, Chief Product Officer at ATTOM Data Solutions. “That all happened as mortgage rates sank back to near-historic lows, which clearly powered the market upward along with stock market surges and a continued strong economy.