Home >> Daily Dose >> Risk and Reward in the Non-QM Market

Risk and Reward in the Non-QM Market 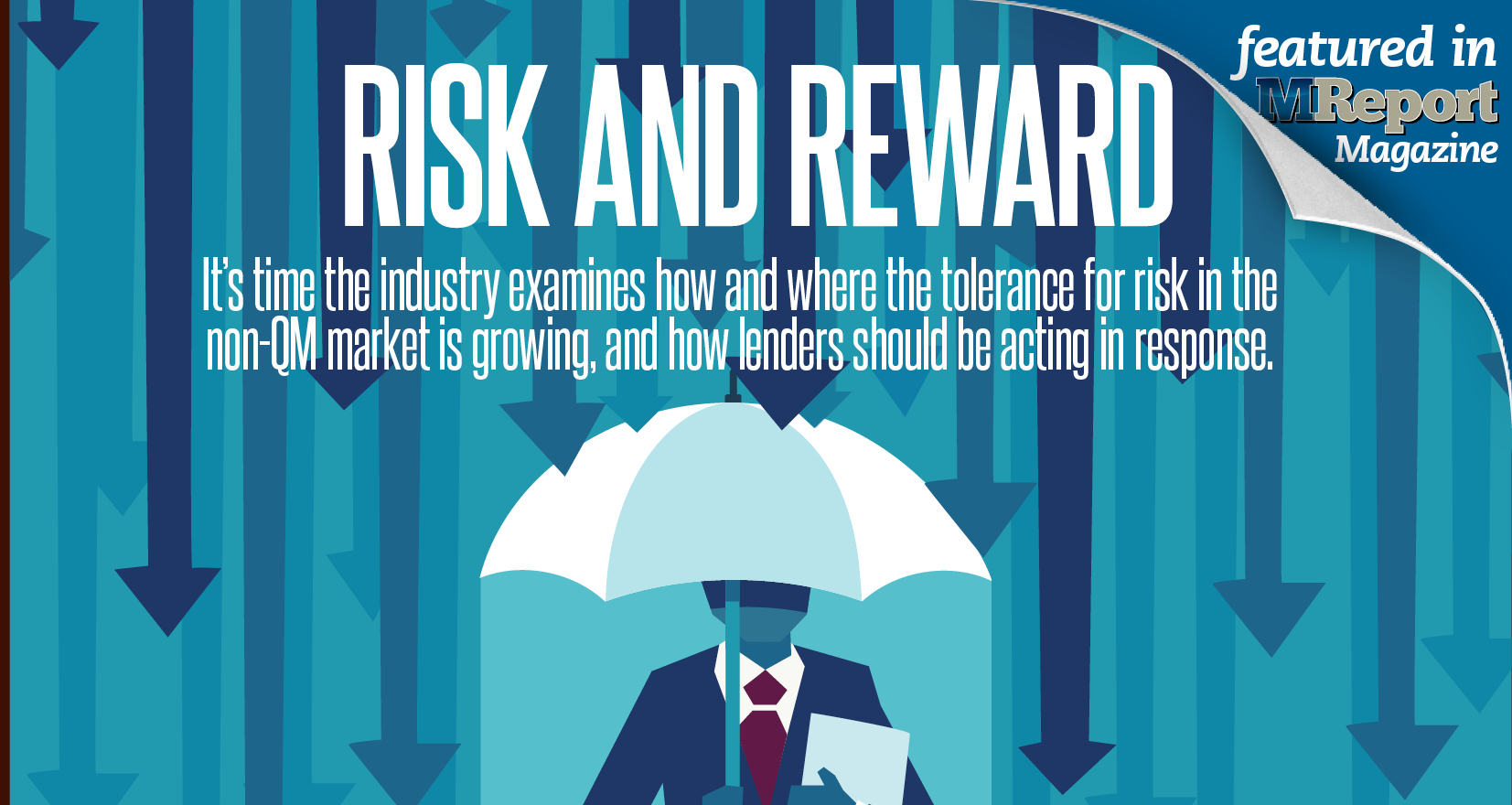 Editor’s note: This feature originally appeared in the October issue of MReport.

There’s little doubt that the non-QM loan volume is growing, and that lenders and investors are showing an increasing appetite for an expanded credit box. It’s also obvious that the increased risk tolerance for non-QM loans is being driven by lenders’ desire to capture as much market demand as they can in a favorable rate environment.

What isn’t as obvious is where all this is heading. With the volume and types of expanded credit options likely to continue to increase in the near future, some are beginning to question how much risk lenders and investors are willing to take on, and whether the growth of non-QM lending should be looked at as some sort of red flag. After all, the mortgage industry has a habit of forgetting about its past.

It might be too early to sound any alarms, but these are still good questions to ask. While certain lending behaviors that directly contributed to the last housing crisis do not appear to be taking place today, it’s worthwhile to examine how and where the tolerance for risk in the non-QM market is growing, and what lenders can and should be doing to stay out of trouble.

When the Consumer Financial Protection Bureau (CFPB) adopted the qualified mortgage (QM) rule in 2014, the mortgage industry was running mostly on government paper. That’s still the case today. In fact, according to CoreLogic, the total non-QM loan market only made up about 4% of total mortgage originations in 2018. Yet the non-QM market is steadily growing, with new types of mortgage products being introduced every month, including loans with fewer document requirements, high debt-to-income (DTI) loans, and even interest-only loans.

There is no bigger driver behind non-QM mortgage loans than the need to maintain or expand production. Indeed, in spite of declining interest rates and low unemployment, there have been several signs recently that purchase origination volumes might be tapering off.

In its August market forecast, the Mortgage Bankers Association reported that 30-year fixed rate mortgage rates had fallen more than one percentage point since reaching a high of 5% in November 2018, causing the MBA to project a 38% increase in refinance volume and a 5% increase in purchase volume for 2019. However, the MBA is also predicting that economic growth will “slow to a halt” in early 2020 and possibly enter a recession, due to a combination of economic factors, including the current inverted yield curve.

By extending credit to borrowers who do not fit qualified mortgage rules, lenders are hoping to keep their loan pipelines full and protected, or even benefit since non-QM loans allow them to charge more than QM loans. But what sort of price is to be paid for relaxing credit standards?

It’s well-recorded that government agencies are tolerating higher levels of risk. According to an October 2, 2019, Washington Post article that cited data from the Urban Institute, about 30% of Fannie Mae loans involve payments that are nearly half of the borrowers’ monthly income and 25% of new FHA-guaranteed mortgages had DTI levels over 50%, the highest level in nearly 20 years. Any time lenders and investors loosen their requirements—whether it’s by lowering allowable FICO score requirements or accepting higher DTI ratios—they’re inviting risk, that’s likely to result in a rise in delinquencies and defaults.

Fortunately, the mortgage industry is nowhere near the free-for-all that existed back when lenders were handing out stated income loans like they were candy to borrowers with poor credit. That’s mostly because non-QM lenders must still meet Dodd-Frank requirements to verify a borrower’s ability to repay. The challenge is how to do so since there is no standard for evaluating non-QM risk.

The key is using compensating factors to offset one or more other, less-than-ideal factors, whether it’s the borrower’s low credit score or an interest-only loan. Lenders also have the opportunity to use other industry standards such as residual income tests to offset non-QM risk. There are many different reasons why a loan is designated a non-QM loan, however, and some of these reasons are easier to offset than others.

According to a CoreLogic report from March, the three most common reasons why non-QM loans did not fit the QM definition are high DTI levels, the use of limited or alternative documentation, and interest-only loan characteristics, in that order. In fact, 46% of non-QM borrowers had DTIs over the 43% QM limit, while another 44% of non-QM loans involved limited or alternative documentation from the borrower.

Loans with high DTIs appear to be the fastest-growing type of non-QM loan. According to CoreLogic stats, the share of non-QM loans exceeding the QM threshold of 43% grew more than three times from 2014 to 2018. Nevertheless, the risk of default for high-DTI non-QM loans is low—as long as the borrower has provided all the documents to show they have sufficient income and assets, or by taking other compensating factors into consideration.

The key to mitigating the risk of non-QM lending is to look at the total picture and take into account all of the characteristics of the loan and the borrower. For example, non-QM loans with high DTIs can be offset by requiring borrowers to have high FICO scores or a low loan-to-value (LTV) ratio. A borrower’s high DTI could also be offset through assets and reserves. A non-QM loan, then, should be considered safe as long as the lender is able to prove the risk was justified, which is done by looking at compelling compensating factors.

On the other hand, there is certainly greater risk with non-QM loans that allow limited or alternative documentation for proving a borrower’s ability to repay.

For self employed borrowers, who make up a large proportion of non-QM borrowers, this generally means relying on bank statements instead of business and personal tax returns. But, anytime a lender relies on fewer documents to validate a borrower’s income and assets, it comes with an increase in risk.

Taken one step further, allowing a combination of both high DTI and limited or alternative documentation on a non-QM loan poses an even greater and unnecessary risk. By originating loans with both factors present, lenders are expanding the credit box without getting the full picture of the borrower’s income. This type of activity is problematic and pushed to extremes, it could lead to another credit crisis.

Currently, there is confusion about what actually constitutes a non-QM loan. While the CFPB’s QM rule and its definitions are relatively clear, an exception to the 43% DTI limit has been made for Fannie Mae and Freddie Mac. All loans backed by the GSEs are automatically considered QM as they required temporary relief until January 10, 2021, or when the GSEs are released from conservatorship, whichever comes first; however, both the government sponsored enterprises (GSEs) bought loans with DTIs as high as 45% until July 2017 and then raised that limit to 50%.

This exemption is currently referred to as the GSE QM “patch,” and as of this writing, there has been discussion in Washington, D.C. regarding if and how long it will be allowed to continue. Either way, this situation has created a confusing double standard. In fact, as a result of the patch, as many as a third of loans sold to the GSEs have DTIs over 43% percent, yet they are still considered QM compliant.

The current overall level of risk tolerance for non-QM loans is still nowhere near the depths we saw before the last housing crisis. But as the credit box continues to expand, an unchecked appetite for risk could lead us down the same destructive path. For example, a change in the political landscape or trade policy could trigger a slowdown in the U.S. economy, which could lead to job layoffs. Combine such a scenario with over-appreciated home values, and we could be looking at another perfect storm of events that place everybody at risk, especially banks and servicers with a large number of high-LTV loans on their books.

The bottom line is that lenders should never be in the business of putting people into homes they cannot afford. An ideal housing market is one in which consumers who deserve mortgages get them, so long as they are able to show they have the ability to repay. By demonstrating an ability to pay, non-QM lenders can have some confidence that they are matching consumers with the right loans and supporting healthy homeownership. But once again, the question is how lenders are demonstrating this because there really are no clear set of rules or guidelines.

I truly believe that’s where we are today, but things could always change. Famed Chicago journalist Sydney J. Harris once wrote that “history repeats itself, but in such cunning disguise that we never detect the resemblance until the damage is done.” The more lenders continue to expand the credit box to make up for lost production, the more risk they will incur. If we hope to avoid the mistakes of the past, it’s a situation well-worth keeping an eye on.

Elliot Salzman is the Chief Credit and Compliance Officer for LoanLogics, a recognized leader in loan quality technology for mortgage manufacturing and loan acquisition. Salzman has more than 25 years’ experience in the mortgage industry and has held numerous executive roles overseeing operations and credit policy.