Three more states are nearing their historic benchmark levels for housing activity, Freddie Mac announced Wednesday. Indiana, Alabama and New Jersey have made it to the list of states within range of their benchmark averages on Freddie Mac’s  Multi-Indicator Market Index (MiMi). The biggest improvements occurred in the South, whereas markets in the West are continuing to have affordability issues, according to Freddie Mac.

Nationally, the index stands at 85.7, indicating a housing market that's on the outer edge of its historic benchmark range of housing activity. That’s a 1 percent improvement from July to August and a three-month improvement of 1.22 percent. Year-over-year, the index is up 5.44 percent.

“The housing market is showing strength across the country,” said Freddie Mac Deputy Chief Economist Len Kiefer. “The South continues to show some the biggest improvements, especially in Florida‒‒up more than 30 percent in Florida compared to last year. Meanwhile, in the West, the battle between low mortgage rates and rising house prices continues. So far, low mortgage rates have helped on the affordability front, but in hot markets like Denver, Fresno, Provo, and Los Angeles, it's becoming increasingly difficult for the typical family to afford a median price home.”

With Alabama, Indiana, and New Jersey coming around, 41 states plus the District of Columbia now have index values within range of their benchmark averages, Freddie Mac reported. Utah, Colorado, Hawaii, Idaho, and North Dakota, all with values above 95, led the way. ranking in the top five with scores closest to their historical benchmark index levels of 100.

The most improved states month-over-month were Nevada, Florida, Illinois, Washington, and Alabama. All improved near or above 2 percent. Year-over-year basis, Florida, Massachusetts, Nevada, Oregon, and Tennessee each improved more than 9 percent.

Dayton is the latest metro area to near its index benchmark. That means 80 of the 100 metro areas sampled now have values within benchmark range, with Los Angeles, California and Provo, Utah having values above 100. 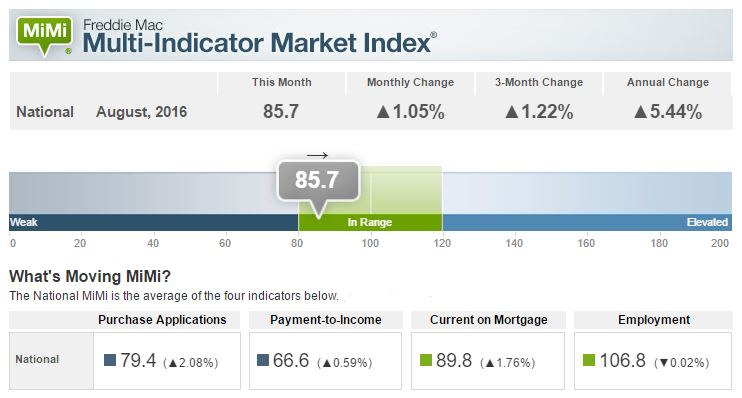