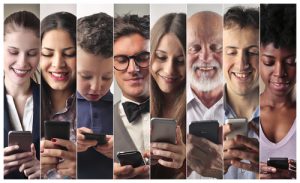 FOMO, or the fear of missing out, is a type of anxiety that stems from the belief that others might be having fun or doing better while you are not. Most people are not immune to FOMO and new research by the STRATMOR Group has found that mortgage lenders are not immune to this feeling either.

In response to the question “Are we missing out on the latest technologies?” that is oft asked of STRATMOR, a mortgage advisory firm, the company has released a new insight report by Tom Finnegan answering that question which is usually on the topic of automation in the digital mortgage space.

“It’s not surprising that mortgage company executives and managers are asking this question,” Finnegan said. “We know that there is a strong interest in process improvement which is reflected in the great participation in our operations, customer experience, and consumer direct workshops. The likelihood of lower volumes in the next few years due to the burnout of refinance opportunities, which will put pressure on profits and a premium on efficient operations, is driving mortgage bankers to look at how they can best earn income and spend their dollars.”

While the pandemic helped push digitization, Finnegan says that lenders are asking about new technologies out of fear that they will be left behind by other lenders who implement them when they should instead concentrate more on “giving technology context through process and adoption.”

“Failing to make this important shift means that they will never enjoy a suitable return on any new technology they implement,” Finnegan said. 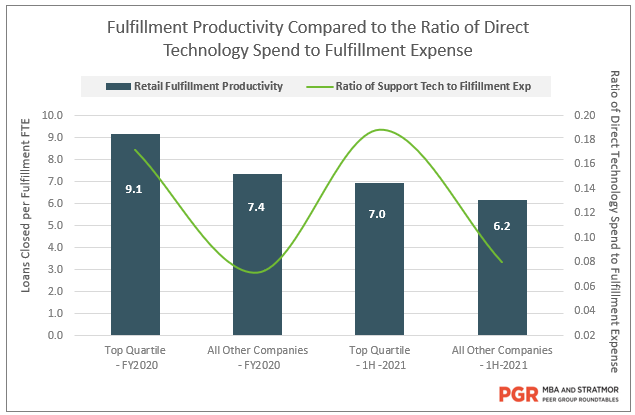 Based on data collected over the last 20 years by STRATMOR and the Mortgage Bankers Association, Finnegan found that there is no correlation between how much a company spends on technology and a lower fulfillment cost per loan or a higher net production income for banks and independents.

“We are not able to ascertain any correlation between technology spend and production profitability in the retail channel at this point,” Finnegan said. “If there were a technology magic bullet, the provider of that ammo would likely be the most successful mortgage software company on the planet.”

Finnegan continued by saying that lenders should instead focus on the people that adopt their digital process and by which they will use them to add value to the borrower, which can ensure a return from virtually any technology the lender chooses to implement.

“That is not to say that mortgage banking firms don’t need to stay current and aware of what is going on in terms of technology and process and continue to embrace improved technology within their companies,” Finnegan said. “A healthy concern about the competition is a key ingredient to staying sharp and improving operations. For example, meeting the customer in the manner of their choosing—whether in-person, by phone, or online—the front end of the digital process has become table stakes in terms of customer experience, which can’t be ignored by lenders of any size.”

“But focusing the lender’s energy on identifying the best possible technologies is actually less critical than focusing on the people who will adopt and use the tools inside the lender’s enterprise and the process by which they will use these tools to add value to the borrower. We have observed many instances where a strong, focused staff can overcome somewhat inferior technology, but few or no examples where a weak team can effectively deploy the newest technology well.”

Companies should instead focus on not just buying technology, but pushing for full adoption of it and implementing process changes that will enable the best use of the technology for both the lender and consumer.

“Lenders that focus on their people and process first will see a greater lift from any new technology they implement, regardless of whether the Joneses are using it,” Finnegan concluded. “STRATMOR continues to observe the benefits of having an intense focus on the people and process aspects of technology adoption at our clients’ shops—making sure that existing technology investments are being fully utilized and integrated into the process, and that new technology will work well for the client.

A full copy of the report can be found here.