Home prices in September were up more than 6 percent compared to a year ago and look to be up another 5 percent by this time next year, according to the September CoreLogic U.S. Home Price Report— [1]and a corresponding rise in home equity has been a boon to homeowners.

“Home equity wealth has doubled during the last five years to $13 trillion, largely because of the recovery in home prices,” said Frank Nothaft, chief economist for CoreLogic. “Nationwide during the past year, the average gain in housing wealth was about $11,000 per homeowner, but with wide geographic variation.”

Anand Nallathambi, president and CEO of CoreLogic, echoed that point.

“Home price growth creates wealth for owners with home equity,” Nallathambi said. “A 5 percent rise in home values over the next year would create another $1 trillion in home equity wealth for homeowners.”

Compared to August, September’s home prices nationally were up about 1 percent. CoreLogic expects October’s prices to inch upwards by 0.3 percent.

Oregon and Washington saw the largest jump in single-family home prices over the past year. Each market saw prices rise by more than 10 percent. Colorado wasn’t far behind, seeing prices rice nearly 9 percent since last September.

The Denver area saw the largest bump in major-city markets over the same time frame: 9.4 percent. The Las Vegas, Los Angeles, and Miami saw prices increase above 6 percent each.

Only one market, Alaska, saw home prices drop since last September. Alaska prices were down 0.3 percent. Similarly, North Dakota was the only state to see prices rise less than 1 percent over the year. Most state markets were up by 3 to 6 percent. 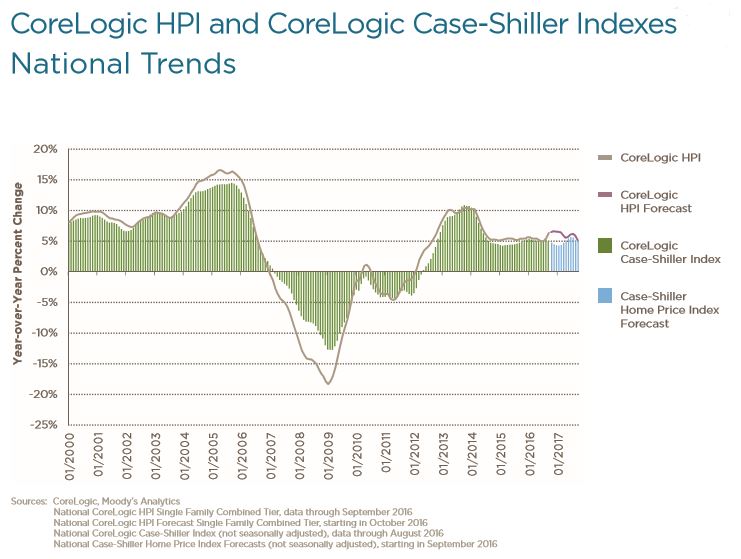