Home >> Daily Dose >> What’s a Home Worth? A Lot More These Days

What’s a Home Worth? A Lot More These Days

Rising home values continue to narrow the gap between appraisal valuations and homeowner perception. The differential between what homeowners think their properties are worth and what they’re actually worth is coming more into line as home values rose by nearly 6 percent over-the-year in October, according to data from Quicken Loans.

While owner estimates were still above appraisers’ opinions in October, the average appraisal was only 1.15 percent lower than the homeowner expected, according to the October Quicken Loans Home Price Perception Index (HPPI).

That’s down from the 1.26 percent differential between appraisal valuations and homeowner estimates in September. October represented the fourth consecutive month in which the gap narrowed between the two.

“This information can be helpful to homeowners to either prevent bumps in the mortgage process or realize they may have more equity available to them than they think,” said Quicken Loans Chief Economist Bob Walters.

Beyond appraisals and opinions, Quicken reported hard numbers Tuesday that show that annual home value growth has been slowing. Nationally, appraised values are 6 percent above what they were a year ago, which Quicken said is a solid rate of growth—but a slightly slower pace than September's over-the-year increase of 8 percent.

Local trends stayed largely the same as September. Appraisal values surpassed homeowner estimates in the West and lagged behind in the East and Midwest. Denver, San Francisco, and Portland still topped the list of cities where appraised values were higher than owner estimates. Philadelphia, Baltimore, and Detroit remained at the bottom, where estimates outpaced appraisals.

Average home values, as measured by appraisals, dropped 0.62 percent nationally in October, according to Quicken’s Home Value Index (HVI). This extended reductions seen in September, when appraised values dipped by 0.28 percent. Despite the monthly declines, home values were still up by nearly 6 percent over-the-year in October. The over-the-year numbers are often more reliable than over-the-month due to the volatility that can occur in monthly values.

“The monthly dips in home values are likely a result of the cooling demand for housing during the autumn months,” Walters said. “Fluctuations in monthly numbers are expected. Attention should always be paid to the annual measures to ensure positive growth compared to the same season the previous year. The yearly measure in October continues to show strong growth and a positive outlook for housing.” 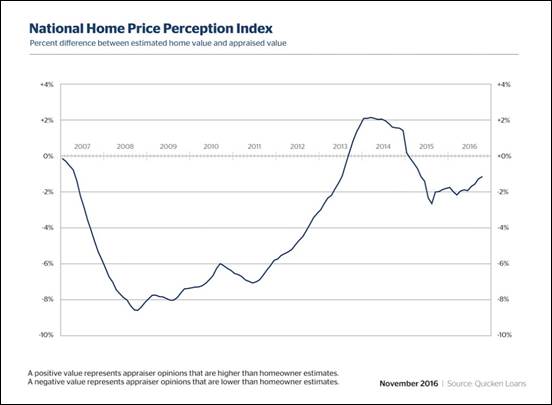