Refis Reduced to 45% of Total Volume

The latest data from Optimal Blue’s daily interest rate tracker found interest rates for a 30-year mortgage by the end of October increased 6 basis points to 3.27%, which now totals a 30 basis point increase over the last three months.

This data, which comes from a new report from Black Knight Inc., also showed that as a result of rising interest rates, rate/term refinance activity is down 62.5% from the same period last year when interest rates were under 3% and a 23.3% decline since last month.

Similarly, the rates for FHA and VA loans also rose by 15 basis points.

According to the report, the rise in interest rates has also caused the volume of refinance applications to decline to 45% of total volume, the lowest level it has been since June. 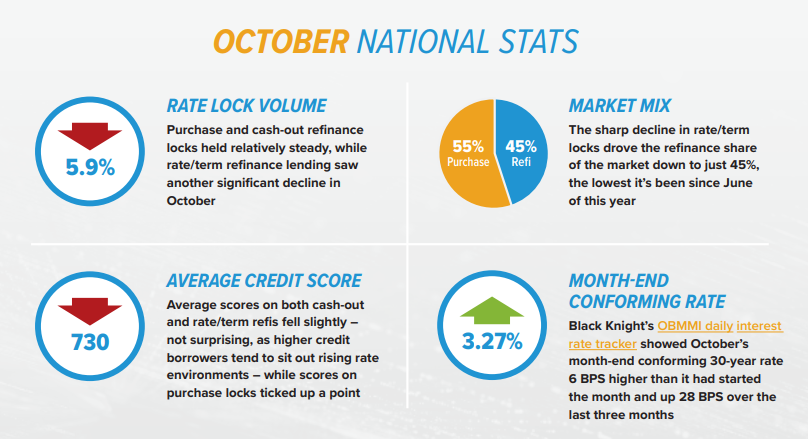 The report also noted that while rate locks on cash-out refinances (-0.3%) and purchase loans (+0.4%) remained relatively flat in October, overall volumes fell by 5.9% due to a more than 23% decline in rate/term refinance locks.

"The ongoing decline in rate/term refinance locks picked up pace in October as 30-year rates continue to rise," said Scott Happ, the President of Black Knight Secondary Marketing Technologies. "In fact, locks on rate/term refinance loans were down by more than 23% since last month and are now almost 63% off where they were this time last year. Back then, 30-year rate offerings hovered in the 2.8-2.9% range, whereas our OBMMI daily interest rate tracker showed October's month-end conforming 30-year rate at 3.27%. Jumbo offerings, on the other hand, have risen more slowly over the past three months and ended October nearly 10 basis points below conforming rates."

"As Black Knight noted in our most recent Mortgage Monitor report, the dynamics of the refinance market are changing, with a sharp shift away from rate/term refis to cash-out lending," Happ continued. "This shift tends to happen in any rising rate environment, never mind one in which American mortgage holders have more than $9 trillion in tappable equity available to them. While we did see cash-out locks tick down in October, the overall trend toward an equity-centric refi market remains strong and one we will continue to watch closely in the coming months."

To view the report, including breakdowns for the top-20 metropolitan areas, click here.