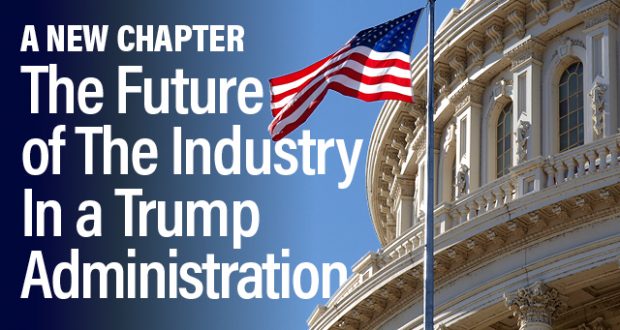 A New Chapter: The Trump Effect on Regulation

(Editor's note: This story is part one in a three-part series for MReport on the potential effect of Donald Trump's presidency on the housing industry. Thursday's story will cover predictions for the Trump cabinet and Friday's installment will cover the housing market under the Trump Administration.)

Since President-elect Donald Trump has scarcely spoken on housing policy during his campaign, the news of his winning the presidency early Wednesday morning has had analysts widely speculating on what the next four years will hold for housing industry regulation.

One thing is certain, Trump has openly stated his belief that the financial industry, and housing in particular, is over-regulated and that he plans to overhaul the Dodd-Frank Act of 2010, which the Obama Administration considers to be one of its greatest victories. Trump, a real estate entrepreneur by trade, has made it clear that he will review all regulations that the Obama Administration put in place.

Former Congressman Barney Frank (D-Massachusetts), one of the architects of the Dodd-Frank Act, told MReport that it is too soon to make any determination as to Trump’s effect on regulation, but did say, “Trump will want to cut back. I also think he will appoint people who won’t want to use the power very much.”

Frank continued, “His views are not as developed as the Republican members of Congress. That’s something he’s going to have to work out with them.”

“Many of our clients, major banks and so called ‘non-banks’, tell us they wake up nightly in fear of their government,” says the Collingwood Group Chairman Tim Rood. “At a minimum, the Trump administration has the chance to decriminalize administrative over-regulation and foot-faults, which could allow lenders to remove credit overlays and leverage government lending programs to their fullest and intended public policy purpose to benefit qualified home buyers.”

Since Republicans will have control of both the House and the Senate, Trump will likely have a freer hand to shape policy than Obama has had for the last few years while Republicans have controlled both. A Trump presidency will almost certainly mean a change in direction for housing policy, as opposed to a Clinton presidency, which likely would have continued on the same path as Obama’s regulations, according to Rood.

“Trump hasn’t much discussed housing policy during his campaign, but he has hinted to ‘Make America Great Again’ by boosting the homeownership rate through demand-side policies, such as financial deregulation, rather than through supply-side policies such as reducing local impediments to new supply,” Trulia Chief Economist Ralph McLaughlin said. “Like other markets, prices are likely to rise further if policies lopsidedly target demand without also addressing supply. In few other industries than housing is addressing supply equally as important as demand for mitigating affordability pressures, and we advise President-elect Trump to take a more balanced approach to the housing market as President Obama.”

Since Trump is a businessman, some view his election as a major victory for banks; Dick Bove, VP of equity research at Rafferty Capital Markets, told CNBC that the election of Trump is a “grand slam home run for the industry,” saying that banks will benefit from legislative, regulatory, and economic standpoints, since Trump has said he plans to roll back key financial regulation passed by the Obama Administration.

“I think there are two things that people are expecting from him,” said Kevin Brungardt, CEO of RoundPoint Mortgage. “One is, at his core he's a business guy, so I think he believes firmly that less regulation is better to drive down the cost on business and release small- to mid-size firms so they can do more business. Two, I think from a tax perspective, he certainly wants to keep taxes where they are or reduce taxes again to promote growth. I think he's very friendly to business and I think people are counting on him releasing or removing some of the regulatory impacts on business right now so that they can more freely operate. I think the market is somewhat celebrating that. It’s also early on, so let’s digest that. My initial reaction is, he is very pro-business and they are looking forward to a very pro-business commander-in-chief.”

Trump has also briefly mentioned the possibility of eliminating HUD, a move that would send a shock wave through the housing industry.

“While local and state policies are likely to be unaffected, major programs—such as the Low Income Housing Tax Credit and Section 8 housing vouchers—could be on the table for reform,” McLaughlin said. “Regardless if, or how, Trump reforms these programs, we hope he doesn’t lose sight of the millions of Americans who struggle to afford housing on a daily basis.”

Disbanding HUD, the CFPB, or the GSEs, an idea that has also been mentioned, is unlikely to happen in the near term, according to Cornerstone Advisors Principal Steve Williams.

“To me, the 'repeal' of Dodd-Frank' is a bit of a sound byte on the Republican side of things,” Williams said. “That's a pretty big, complex thing. Repealing something with so many facets is not something that happens overnight or in totality. Dodd-Frank has several different components. But I think the one that will probably be addressed or become controversial is looking at what is perceived by some as the overrreach of the CFPB. I think you will see a dampening or a focus supported by Trump and Congress to try and restrain the reach of the CFPB going forward. It's interesting to me because with the Wells Fargo incident of a month or two ago, I think the CFPB felt their purpose was confirmed. I think there were many folks expecting to be more powerful under a Clinton Administration that saw taking that to the next level of consumer protection. I think that clearly is going to change under the trifecta of a Republican president, House, and Senate.”

If Trump tries to actually eliminate any of the government agencies such as HUD, the GSEs, or the CFPB, Williams said, “I don't predict a revolution. I think the complexity makes it difficult for anyone to turn that quickly. I do not think we'll see the social expansion of government risk-taking through housing. I think it will head the other way, but I don't think we'll see a disbanding of the GSEs or even HUD overnight.”

“I believe that in the long run, a Trump presidency will be good for the housing and mortgage markets,” Ten-X Chief Marketing Officer Rick Sharga said. “He seems committed to bringing regulatory relief—and regulatory certainty—to the financial services industry, which should make more credit more available to average homebuyers who have been locked out of the market by today's extraordinarily tight credit standards. This should also bring back some of the smaller lenders, such as community banks, which have opted out of the mortgage market due to the costs of compliance and regulatory risks.”

On the possibility of eliminating or overhauling the CFPB, Sharga said, “It's possible that the CFPB will be restructured, moving from a single director to a committee, and with more direct Congressional oversight. There may be more focus on programs and less focus on enforcement activity. The GSE conservatorship will almost undoubtedly come to an end as well, but whether the outcome is privatization, dissolution, combination into a single quasi-government entity or something entirely different is yet to be determined. But the implicit government guarantee will probably go away. Whatever changes are made need to be made carefully and thoughtfully, since government entities are underwriting about 96 percent of all mortgages, and unplugging these entities suddenly could be disastrous.”

Previous: Headwinds Descending on Housing Market
Next: Crisis is Over, but Credit Blemishes Linger