Are Subprime Originations Making a Comeback?

Subprime mortgage originations hit their highest level in seven years during Q2 while near prime originations reached a post-recession high, according to recently-released data from TransUnion.

TransUnion’s Q3 2016 Industry Insights Report found that subprime originations (viewed in one-quarter arrears to account for reporting lag) totaled 64,000 in the second quarter, which was an over-the-year increase of nearly 11 percent and the highest level since the fourth quarter of 2009. Also in Q2, Near prime originations rose to their highest number since the Great Recession, up to 262,000 (a 5.7 percent increase).

However, TransUnion said they are not concerned about another potential crash, since subprime and near prime loans represent a relatively small share of the overall originations market. Mortgage originations overall rose to 1.99 million in Q2, an increase of 3.7 percent over-the-year.

“Mortgage originations have experienced steady growth across all risk tiers, and these new milestones in subprime and near prime account originations reflect growing credit access across the risk spectrum,” said Joe Mellman, vice president and mortgage business leader for TransUnion. “While access has grown, it’s important to note that the subprime share of originations was only 3.2 percent, and the near prime share was 13.2 percent of all originations. We do not see a cause for concern.”

In the third quarter, total mortgage balances reached $8.25 billion, in increase of 1.7 percent over-the-year, according to TransUnion.

The overall quality of mortgage loans improved in Q3, as the mortgage delinquency rate declined by 8.4 percent down to 2.29 percent—the lowest level in seven years.

“The consumer credit market is performing well, as more consumers are gaining access to loans and paying them off in a timely fashion,” said Nidhi Verma, senior director of research and consulting in TransUnion’s financial services business unit. “We continue to see strong participation rates from the youngest consumer group, coupled with low delinquency levels—a promising sign for the industry.” 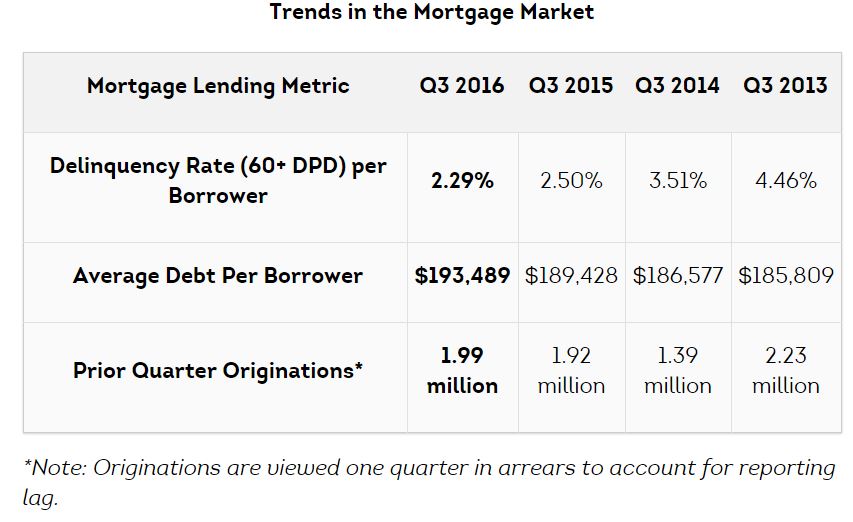 Previous: The Effect of Effective Servicing Surveillance
Next: A Closer Look at What Lies Ahead