The House Always Wins. Or Does It?

Six years ago, when the economy was in the tank, a lot of investors had to decide whether to put their money in the stock market or in real estate. Conventional logic suggested that despite the housing market at the time, real estate would come out on top. But a new study by Redfin and FutureAdvisor found conventional logic to be not so accurate.

According to the study, 20 of 24 metros studied between 2010 and 2016 showed that financial portfolios outperformed median home values‒‒in some cases exceedingly so, even though real estate proved to be solid on its own.

The exceptions were Miami and northern California, where housing prices soared and then crashed. But elsewhere, financial portfolios did notably better than housing. This was most exaggerated between Philadelphia and North Carolina, where housing prices have grown between 11 and 14 percent since 2010, but financial portfolios have grown more than 60 percent.

“What is striking about this analysis is that from 2010 to 2016, the overall growth has been relatively strong for both real estate and stocks,” Redfin reported. “However, the percentage of Americans who have invested in the stock market this year is near record lows‒‒just 52 percent since Gallup began tracking this two decades ago.”

It’s also worth noting that homeownership sits near record lows as well at 63.5 percent in Q3, up from a 51-year low of 62.9 percent in Q2, according to the latest Census data.

“There are pros and cons to any investment, but real estate is unique in that it offers the advantage of forced savings through the monthly mortgage payment,” said Redfin chief economist Nela Richardson. “The fact that homeowners build equity just by paying their mortgages every month enforces a savings discipline on consumers that is absent in stocks. For this reason, real estate historically has served as the primary engine of wealth creation, particularly for the middle class.”

Click here to view the complete analysis from Redfin. 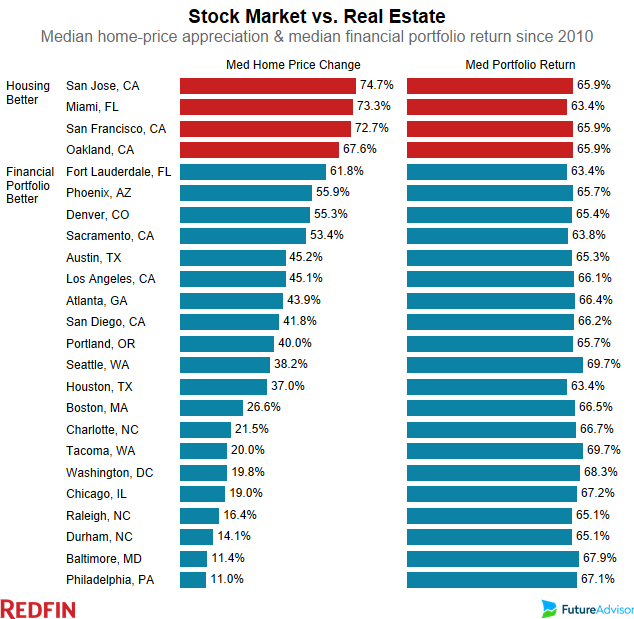 Previous: The Week Ahead: Can Housing Starts Keep Up the Pace?
Next: Is the Future of CFPB’s Arbitration Proposal in Doubt?