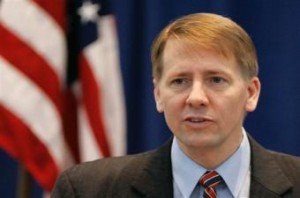 Richard Cordray, the Obama-appointed director of the Consumer Financial Protection Bureau (CFPB), announced his resignation—stating that he will step down before the end of the month.

Cordray officially announced his resignation in an email to employees.

"As I have said many times, but feel just as much today as I ever have, it has been a joy of my life to have the opportunity to serve our country as the first director of the Consumer Bureau by working alongside all of you here," he wrote.

The CFPB has been controversial since its inception as part of the 2010 Dodd-Frank Act following the 2008 financial crisis, which overhauled how the federal government regulated and oversaw the financial industry. Critics argue that CFPB has made it more difficult for people to get a mortgage loan.

“We are long overdue for new leadership at the CFPB, a rogue agency that has done more to hurt consumers than help them,” said Hensarling, who has continuously stated his opposition for the agency. “The extreme overregulation it imposes on our economy leads to higher costs and less access to financial products and services, particularly for Americans with lower and middle incomes.”

However, there are other views on Cordray’s work during his time leading the agency. Congresswoman Maxine Waters (D-California) called Cordray a “true champion for American consumers” in response to his stepping down.

“Under his outstanding leadership, the Consumer Bureau has made the financial marketplace stronger and fairer for hardworking Americans across the country,” said Waters. “As the first Director of the Consumer Bureau, he has overseen the implementation of much-needed rules on mortgages, prepaid cards, and payday and auto title loans, clamping down on unfair practices and ensuring that consumers are not ripped off.”

Jennifer Lee, Partner at the international law firm Dorsey & Whitney said that as the only federal consumer regulator created in this century, it can’t be disputed that Director Cordray maximized the opportunity to effectuate change, leaving a lasting and arguably irreversible legacy in the Bureau’s culture.

“The future for the Bureau will entail evolving and aggressive policy positions because of the ethos that senior leadership embedded in the agency’s DNA at its creation," Lee said.

Further reaction to Cordray's announcement views the leadership change as a new opportunity for American homeownership.

“I wish Mr. Cordray success in his next endeavor,” said Five Star President and CEO Ed Delgado. “A change in leadership at the CFPB presents an opportunity for the bureau and the federal government to strike a collaborative stance toward common-sense regulatory reform that protects the interests of homeowners. We look forward to continuing to work with the bureau on issues of concern in promoting homeownership.”

Additionally, Joseph Lynyak III, Partner at Dorsey & Whitney, thinks the news could lead to a balance between opposing views.

"This decision on the part of the Director now allows the Administration to appoint an individual who can balance the needs of consumers with those of the industry through competent management," said Lynyak.

In Cordray’s resignation letter, he stated all the work the CFPB has done during his time, including $12 billion in relief recovered for nearly 30 million consumers; stronger safeguards against irresponsible mortgage practices that caused the financial crisis and hurt millions of Americans; giving people a voice by handling over 1.3 million complaints that led to problems getting fixed for vast numbers of individuals, and creating new ways to bring financial education to the public so that people can take more control over their economic lives.

“None of this could have happened without all of us being dedicated to pull together in supporting and protecting people and making every consumer count,” Cordray said. “I will always be immensely proud of you and what you have done.”

Cordray has been rumored to be considering a run for governor of Ohio, but he gave no indication Wednesday of what his plans are.

"If Rich Cordray runs for governor of Ohio, he would be a very strong candidate," said Adam Green, Co-Founder of the Progressive Change Campaign Committee. "With his record of advocating for consumers against predatory banks and credit card companies—an agenda popular with Democrats, Independents, and Republicans—Cordray would tap into the economic populist vein of the electorate that Sherrod Brown and Donald Trump both tapped into in Ohio."