What a More Remote Future Means for the Market 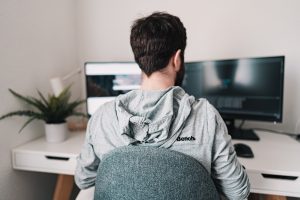 Until about two years ago, remote work was a novelty for many, something only used for sick days or special occasions. But as the COVID-19 pandemic closed offices across the country, remote work became a necessity for many as it looks to be sticking around as the pandemic wanes, creating new housing opportunities for those with a fully-remote schedule.

According to Daniel McCue, a Senior Research Associate for the Joint Center for Housing Studies at Harvard University, working from home appears to be an outcome of the pandemic that is here to stay. This trend is now backed up by data and the real-world application of the switch that shows that large-scale remote work is not just possible, but is preferable to both parties.

According to a recent study by Realtor.com, the ability to work from home even a day or two per week has the potential to reshape housing markets as the rise in remote work is also a key driver of homebuying growth this winter: 23% of sellers are looking for a home office and 19% no longer need to live near their workplace, up from 6% in March.

Urban sprawl also comes up as a possible consequence of remote work as many can live outside of major job centers in the suburbs where homes are bigger and cheaper.

“While increased working from home can raise demand for living in areas farther away from city centers, it may not necessarily mean less demand for living in cities,” McCue wrote in the report. “Some urban neighborhoods may even see more demand as highly desirable city neighborhoods, which were once only convenient to a subset of commuters, become more accessible to a larger set of potential new residents. At the same time, however, this could be a problem for distressed urban neighborhoods where proximity to employment centers may have been their best asset. Outlying suburbs and rural areas, too, with fewer amenities and poorer access to broadband and/or transportation networks, may also be further disadvantaged. These areas could see even less demand which could, in turn, affect the ability of existing residents to move.”

“In a future less tethered by the job-housing link there is a strong possibility that neighborhood amenities could play a larger role in housing choices beyond simply cities vs. Suburbs,” McCue continued. “While increased mobility may open up new neighborhoods and opportunities to some, it could also further neighborhood inequality between amenity-rich and distressed neighborhoods and household inequalities between those who can work from home and those who can’t. Therefore, as we prepare for the impacts of increased working from home on mobility and neighborhood change, we must be sure to consider both the areas in which to expect newfound growth and demand, but also the neighborhoods and households at risk of being left behind.”