The deep-set worry that low-income housing has a deleterious effect on the values of other properties appears to have little basis in reality. According to a new study by Trulia of the country’s 20 least affordable housing markets, low-income housing built during a 10-year span shows no effect on nearby home values.

Trulia reported Wednesday that resistance to affordable housing development has surfaced in places like San Francisco, New York, and Seattle, where low-inventory and high competition has sparked worries about affordable development. But the firm’s analysis of more than 3,000 low-income housing projects built between 1996 to 2006 “found no significant effect on home values located near a low-income housing project, with a few exceptions.”

Boston and Cambridge, Massachusetts, were two exceptions. Low-income housing projects there had a negative effect on nearby homes in terms of price per square foot‒‒a drop of $18 to $19 per square foot, “suggesting a region-specific market effect for these two geographically adjacent metros,” Trulia reported. But the reason could be too-much-too-fast.

“Concentrating subsidized housing projects in particular areas such as Roxbury and Dorchester in Boston, or Cambridgeport in Cambridge in a short time period, for example, might have the effect of crowding out other development activity,” the report stated.

In almost all other markets, low-income housing seems to have had no effect either way. Denver, in fact, was the only metro where low-cost housing actually benefited other homes. 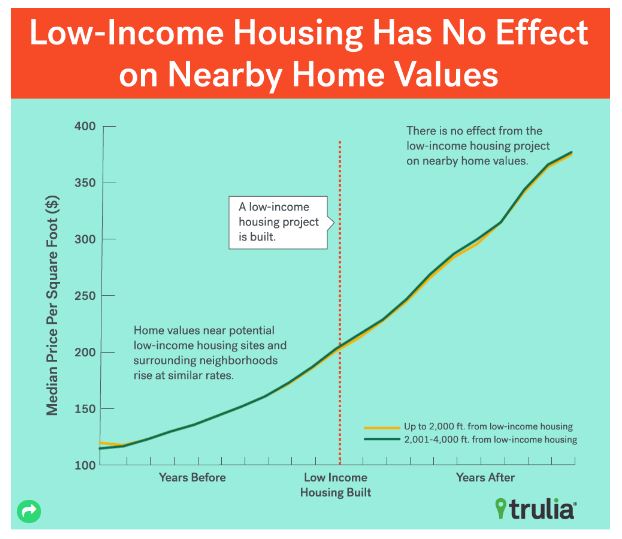 One reason for this could be that parts of downtown Denver around where low-income housing projects were built saw a renaissance in the 1990s, driven by the development of the lower downtown area and the construction of Coors Field.

“Some of these neighborhoods in downtown Denver are now the most sought real estate in the metro area,” the report stated. “Indeed, neighborhoods such as the Central Business District and Five Points, where low-income housing projects were concentrated in our study period, outperformed greater Denver in terms of home values per square foot.”

The important thing to remember, Trulia reported, is that apart from these two wildly disparate examples, the overall truth is that low-cost housing doesn’t affect real estate markets much.