The FHFA’s conservatorship of Fannie Mae and Freddie Mac, which began more than eight years ago, has caused much consternation among mortgage industry stakeholders and among lawmakers on both sides of the political aisle because several analysts have warned that the status quo cannot continue without some type of major disruption to the financial system as a whole.

According to a study released by the Government Accountability Office (GAO) on Friday, the FHFA’s recent actions as conservator of the GSEs have created more, not less, uncertainty for the housing finance system’s future.

In order to clear up the increased uncertainty created by the FHFA’s actions, the GAO stated, “Congress should consider legislation that would establish clear objectives and a transition plan to a reformed housing finance system that enables the enterprises to exit conservatorship.”

The GAO conducted the study with two objectives in mind: to determine how much the FHFA’s goals for the conservatorships have changed, and the implications of these changes for the GSEs’ future and for the broader secondary market. The Office noted that the FHFA took the GSEs into conservatorship in 2008 out of concern that their financial condition at the time would adversely affect the broader financial market.

The study compared two strategic plans released by the FHFA for the conservatorship, one in 2012 and one in 2014, each containing three goals. While the goals outlined in the 2014 report were largely similar to those in the 2012 report, some of the wording changed—notably, the goals in the second report focused more on maintaining credit availability and preventing foreclosure, an increased focus on reducing risk to taxpayers through credit risk transfer rather than shrinking the Enterprises, and on reducing the scope of the securitization infrastructure being built.

“In the absence of congressional direction, FHFA's shift in priorities has altered market participants' perceptions and expectations about the enterprises' ongoing role and added to uncertainty about the future structure of the housing finance system,” the GAO said in its report. “In particular, FHFA halted several actions aimed at reducing the scope of enterprise activities and is seeking to maintain the enterprises in their current state.”

However, the GAO said, other actions continue to be implemented, such as reducing the GSEs’ capital buffer to zero by January 1, 2018—which market participants fear could result in another draw on Treasury. Additionally, increasing credit risk transfers may reduce the likelihood of another draw on Treasury, but other initiatives such as low down-payment programs may increase it. The GAO also noted that the FHFA’s new initiatives to expand mortgage availability might crowd out market participants.

The GAO’s report also noted the many bills that have been introduced in the last three years that address the GSEs’ role in the housing finance system by both Democratic and Republican lawmakers, notably by Senator Bob Corker (R-Tennessee). While the bills have gained various amounts of traction, none have passed.

While FHFA did not immediately respond to a request for comment on the GAO's report, the GAO noted that “FHFA agreed with our overall findings.” 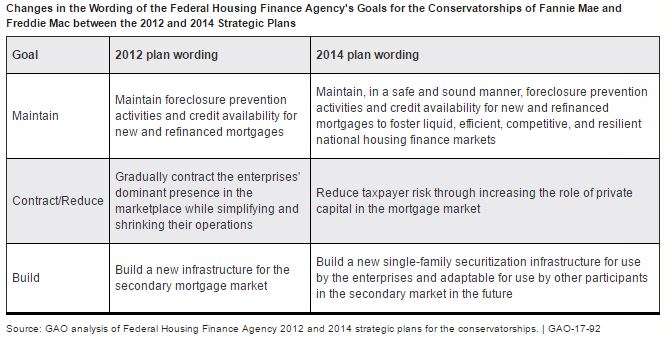