Janet Yellen: A Look Back 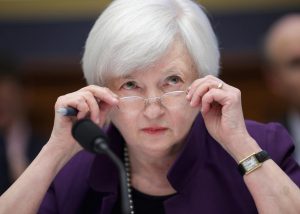 Federal Reserve Chair Janet Yellen announced Monday that she will resign from the Federal Reserve Board in February 2018. The resignation comes after President Trump’s nomination in early November 2017 of Jerome Powell to succeed Yellen as Fed Chair. Yellen could have continued to serve out the remainder of her term as a Fed governor, which would have run through 2024. However, Yellen will instead resign after Powell is sworn in.

Nominated by President Obama in 2014, Yellen succeeded Ben Bernanke and was the first woman to serve as Fed chair. Trump’s nomination of Powell marked a break with longstanding tradition: since G. William Miller’s stint as Fed Chair under President Carter, typically Fed Chairs have been reappointed for a second term.

Yellen’s resignation marks the end of nearly three decades spent serving at the Fed, beginning with her appointment to the Federal Reserve Board of Governors in 1994. She served in that role until 1997, when she became chair of President Clinton’s Council of Economic Advisers. Prior to her nomination under President Obama, she served as vice chair of the Fed Board of Governors under Bernanke.

Yellen’s resignation letter to President Trump made the case that the economy is now stronger than it was a decade ago, citing 17 million net jobs produced over the past eight years. The U.S. unemployment rate also dropped from 6.7 percent to 4.1 percent during her stint. In the aftermath of the Great Recession, Yellen earned controversy among Republicans for taking on $3.5 trillion in Treasuries and mortgage-backed securities. In more recent months, Yellen and the Fed had begun trying to shrink the organization’s balance sheet, allowing some of its assets to mature without being replaced.

Yellen defended her policies during a speech in October, saying:

Yellen’s resignation adds to several vacancies currently waiting to be filled on the Fed board. President Trump has the opportunity to significantly shape the Fed for decades to come, with a vice chair position and three governor slots now vacant.

The U.S. Senate Banking Committee is set to begin confirmation hearings for Powell on November 28. If confirmed, he is widely expected to follow in Yellen’s footsteps and gradually raise interest rates, a process Yellen began in late 2015.

In her resignation letter, Yellen said:

I am enormously proud to have worked alongside many dedicated and highly able women and men, particularly my predecessor as Chair, Ben S. Bernanke, whose leadership during the financial crisis and its aftermath was critical to restoring the soundness of our financial system and the prosperity of our economy.

Previous: Freddie Says 2017 on Track to be Best Year in a Decade
Next: UPDATE: Revised Appraisal Requirements Announced for High-Priced Mortgage Loans