The activity of last two weeks since the presidential election have signaled tons of changes ahead to the political and regulatory landscape starting in 2017. The Trump Administration has already hinted it will be making changes at key cabinet positions, such as HUD Secretary, and also talked about overhauling the CFPB.

At this point, the only certainty is uncertainty—no one knows exactly how the pending changes will affect the economy or housing. But the uncertainty has not hurt Fannie Mae’s predictions for the economy and for housing both for the second half of 2016 and for the year ahead. In its November 2016 Economic and Housing Outlook, Fannie Mae is still predicting 1.8 percent growth for the full year of 2016 (with second-half growth of 2.4 percent more than double that of the first half’s 1.1 percent) with 2017 experiencing a similar rate of economic growth.

“We haven’t changed the general tone of our forecast at this time, but we will incorporate new policy assumptions as they become more concrete. Given campaign themes, we may see some changes in policies regarding corporate and individual tax rates, infrastructure investment, government spending, health care, and immigration,” said Fannie Mae Chief Economist Doug Duncan. “Depending on the incoming President’s policy priorities, our forecast for 2017 is subject to both upside and downside risks. For example, we expect near-term growth would get a boost from any tax cuts and spending increases that are made, but if new policies result in sharply higher tariffs on China and Mexico, rethinking the Trans-Pacific Partnership, and renegotiating the North American Free Trade Agreement, it would likely drag on growth.”

Duncan noted that construction spending in the single-family space has shown signs of stabilizing, meaning residential investment will no longer drag on GDP growth. At the same time, he said a significant challenge for single-family housing is a continued shrinking inventory, especially lower-end homes. 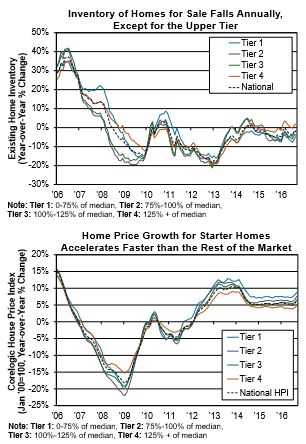 Overall, the number of existing homes for sale dropped off in the third quarter by 6.8 percent, the largest decline since Q2 2013 and the sixth consecutive quarter of year-over-year declines. Houses on the lower end of the market experienced a faster rate of price appreciation than the national average in Q3—prices for the lowest price tier, representing up to 75 percent of the median price, and second-lowest price tier, representing between 75 percent of the median price and the median price, jumped by 8.8 percent and 7.6 percent over-the-year in Q3, respectively. The average national gain was 6.3 percent.

“Demand from first-time buyers has increased with household formation and is outpacing supply, leading to significant price increases and affordability challenges for entry-level buyers,” Duncan said. “Home purchase affordability will be constrained further if the recent pickup in mortgage rates persists, which would present a downside risk to our forecast of housing and mortgage activity.”

Some recent positives for 2017 are: the Fed indicated in its recent Senior Loan Officers Survey that lending standards for GSE and jumbo mortgage relaxed over the three-month period ending in October; and the homeownership rate increased by 60 basis points in Q3 up to 63.5, up from Q2’s 51-year low of 62.9 percent.

Despite the recent spike in mortgage rates up to near the 4 percent level, Fannie Mae said its forecast for housing for the full year 2016 is unchanged and they expect improvements in both housing starts and sales next year.

Previous: Credit Plus Expands Reps and Warranties Coverage for Lenders
Next: SFR Investors Searching Beyond Their Own States