Although the Legal/Regulatory/Compliance category was still the top defect category, there was a substantial drop in this category as a percentage of total loan defects from Q1 to Q2 (from 50 percent down to 34 percent, the first decline in nine months). There was little change in the Loan Package Documentation from Q1 to Q2 (held steady at 26 percent), according to ARMCO.

“While TRID-related defects are still driving the majority of Legal/Regulatory/Compliance defects, we’re seeing a decline in defects in this category as a result of corrective action planning lenders undertook through the first six months of 2016,” said Phil McCall, COO for ARMCO. “As lenders determine the most effective strategies for addressing TRID-related defects, we expect to see this category decline further.” 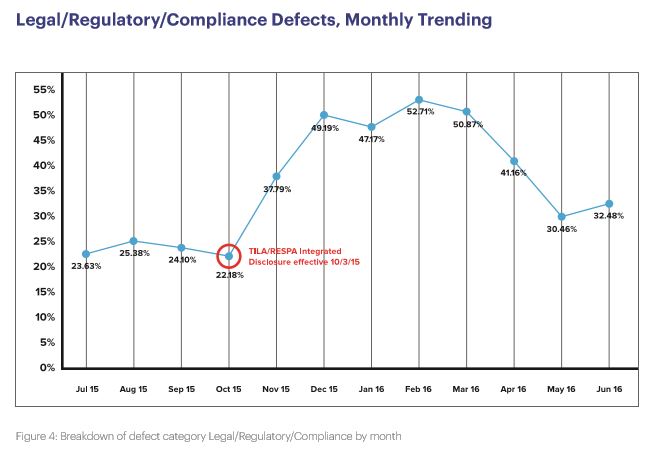 What corrective actions are lenders taking? Based on input from the lenders who contributed, the most reported corrective action taken was “working diligently with their loan origination system (LOS), internal personnel and external providers during the first six months post-TRID to implement automated solutions to mitigate many of the common data errors seen earlier in the implementation phase,” according to ARMCO. “An example of this collaboration is the concerted effort to standardize the naming conventions of all loan fees to provide consistency in how fees are disclosed from the initial LE thru the final CD.”

Also, according to ARMCO, other strategies lenders are employing are the utilization of ad hoc training in order to address process errors and the implementation of best practices to “mitigate errors identified during early implementation.”