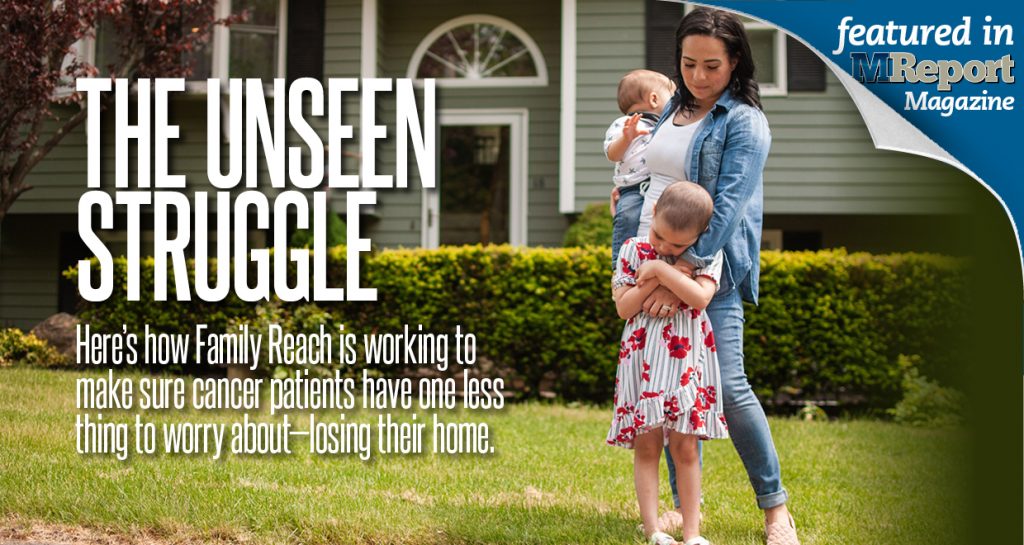 The National Cancer Institute reported that an estimated 1.7 million people were diagnosed with cancer in 2018, and in 2017, an estimated 15,270 children under the age of 19 were diagnosed with cancer. Around 1,790 died of the disease. The impacts of cancer, though, go far beyond what most see in a hospital or in a treatment center. A cancer diagnosis does not stop bills, financial concerns, or mortgage payments from coming in.

According to Family Reach, cancer patients are 2.65 times more likely to file for bankruptcy, and those that do, have a 79% higher mortality rate.

Carla Tardif, CEO of Family Reach, said she has been around these families for the past 11 years, seeing what they’re going through, and “being their voice.”

“People didn’t know what I was talking about, and it was swept under the rug. There’s a lot of shame for the families that are in it,”

Tardif said. “People don’t talk about their finances anyway, and when there’s a cancer diagnosis involved, it feels even more taboo.”

Tardif and Family Reach have been advocates for these families for the past 23 years, providing financial services to ensure patients continue with their cancer treatments while also continuing to make mortgage payments.

Family Reach was founded in 2003 by two families in New Jersey, both of whom had lost a child to cancer.

“They saw firsthand how finances were affecting families and their ability to get [themselves or] their child to the other side of cancer,” Tardif said.

The families began their efforts by raising more than $100,000 through a golf tournament. All funds went back to the two hospitals where their children were treated—New York Presbyterian and Memorial Sloan Kettering—and it was sent to a certain group of people.

“They said to their social workers, ‘This money is not for the hospital. This is for the patients. And we know that you, social workers, are the ones interfacing with the patients. You’re the ones hearing about their nonmedical concerns. Their concern about losing their home, their concern that their heat has been shut off, their concern that there’s a repo guy in their driveway, about to take their car from them,’” Tardif recalled.

Family Reach has gone from a network of three hospitals and distributing about $200,000 annually to encompassing more than 400 hospitals and an annual budget of $10 million. Tardif added that roughly 80% of all funds received go back into the program. To date, the group has helped 31,000 families and has distributed more than $15 million in grants since 2006.

“What’s most exciting about that growth is that we’re not just financial relief anymore. We are full, wraparound financial services,” Tardif said. “Because what we need to do is catch patients and families before they hit these debilitating financial barriers. We need to wipe out the shame. We need to educate them on what they can do. We need to tell them that they’re not alone.”

Tardif, who has spent the past six years as CEO, pointed out that it is important for Family Reach to not be a band-aid, because, “we could never solve it that way.”

The most vital bill that Family Reach pays, as it is often the patients’ biggest non-medical bill. Tardif added that, before cancer, many patients are middle class and don’t have access to food stamps or resources available to many in America.

The likelihood of default and foreclosures within the first three years of treatment for cancer patients increases 35%. That number rises to 65% within five years.

Rosie Cunningham, Director of Strategic Initiatives for Family Reach, told MReport that the organization, in an effort to mitigate foreclosures, is collaborating with Wells Fargo on a pilot program that connects patients directly to HomeFree USA, a HUD-approved counseling agency. Family Reach is also now partnering with Penny Mac on financial relief for families of cancer patients.

Cunningham said HomeFree USA works with patients to identify options to ensure families have “meaningful home preservation options” so they can focus on cancer treatment.

“The interesting thing is that a lot of groups have been surprised by the fact that there is a nonprofit out there directly paying mortgages on behalf of families with cancer,” Cunningham said. “It’s an issue that is so drastically overlooked, and I think the more we reach different services and investors, the more awareness we’re raising for the issue, which is obviously helping us get more partners on board.”

Tardif said that 42% of cancer patients spend their life savings in the first two years—which is exactly what happened to the Kirchdorfer family.

“Before Mikey was diagnosed, we were financially sound. Our mortgage was up to date. We had a small nest egg. Both Ida and I had good jobs,” said Steve Kirchdorfer of Massachusets, whose son, Mikey, battled cancer.

“Once Mikey was diagnosed, Ida left her job as a nurse, and I worked basically from the Children’s Hospital. We quickly exhausted our savings and fell behind on our mortgage.”

“Family Reach not only provided us financial relief but, more importantly, made us feel like we had a partner by our side to help us get through this awful time,” he said.

“The fight against cancer is not a one-on-one battle,” Kirchdorfer said. “It truly takes an army, and without the support of Family Reach and its supporters, our battle would have been a much tougher one.”

Cunningham said that Family Reach has been “on the front lines” with these families for more than two decades, and “we’ve met too many families along the way who become homeless because of cancer treatment.”

“We’ve met the single mothers who are living on a park bench while their child is in treatment in the hospital. We’ve helped parents get out of homeless shelters while their child is in treatment in the hospital,” Cunningham said. “To have the chance to get ahead of this problem and give these families that peace of mind that their home is safe, their home is stable, and they can just be there for their child and focus on getting well, it’s just such an incredible opportunity to provide real meaningful relief for these families that extends so much beyond paying one mortgage payment.”

To learn more and get involved with Family Reach’s efforts, email info@familyreach.org.