Home >> Daily Dose >> How Much Longer Will Housing Favor Sellers?

How Much Longer Will Housing Favor Sellers?

Housing experts believe that the market will shift to favor buyers over sellers at some point, but some think it is going to take longer than others.

Time and choice are the two things that buyers are missing in the current housing market, and in order for the market to shift in the buyers’ favor, would-be buyers will need more of both, Zillow reported.

“Because there are so few homes on the market, and because there are so many buyers chasing those homes, buyers must often make quick offers on available homes, or be exceedingly patient waiting for the ideal home to hit the market, then pouncing aggressively once it does,” said Svenja Gudell, Zillow Chief Economist.

For now, the market favors sellers because inventory has been low and demand has been high, according to Zillow. The demand has been so high that fixer-upper homes are selling at prices close to what well-kept homes are going for, and on top of that, sellers are receiving multiple bids on a home, which often allows them to sell the home at higher than market value. These factors could change soon, according to Gudell. 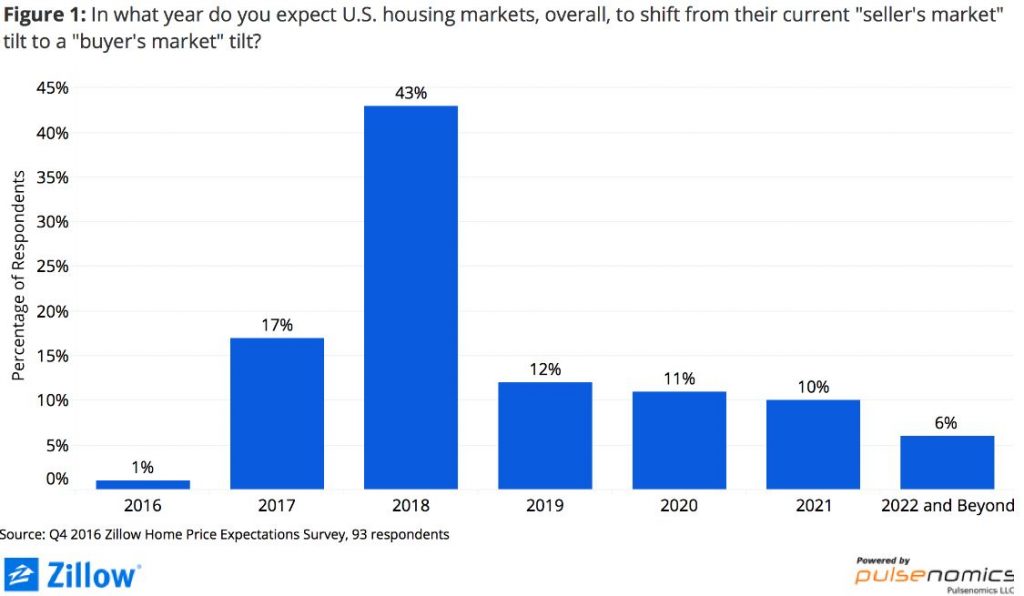 “The number of homes for sale will rise as builders ramp up and more sellers look to capitalize on recent home value gains,” Gudell said. “This will also help to cool off rapid home value appreciation, making it easier for would-be buyers to save for a down payment and not feel so much like they’re trying to hit a moving target. As this happens, the market’s balance should meaningfully swing in favor of buyers.”

Another panel of experts polled by Zillow said they expect home values to raise over-the-year by 4.75 percent by the end of 2016, up from the 4.5 percent pace of appreciation at the end of 2015. However, they expect things to slow down; the expected slowing pace of home price gains may also help the market swing back to buyers’ favor. The experts said they believe that home price appreciation will slow down to 3.6 percent in 2017 and fall off slightly annually until reaching 2.6 percent in 2020—and then rising slightly to 2.84 the next year.