Home >> Daily Dose >> Homeowners and Appraisers: The Gap is Shrinking

Homeowners and Appraisers: The Gap is Shrinking

For the fifth consecutive month, the gap between appraised values of homes and homeowners’ perceptions of what their homes are worth shrunk, according to the Quicken Loans Home Price Perception Index (HPPI) for November 2016.

In an effort to better understand appraisers’ opinions of home values, home value expectations of homeowners refinancing gravitated toward the values given by appraisers through 2016. The National HPPI displayed that the average owner’s estimate of value was 1 percent lower than the appraiser's perspective.

Bob Walters, Chief Economist for Quicken Loans, shared that homeowners and appraisers are slowly coming to an agreement. “The HPPI compares the perceived gap between the homeowner and the appraiser’s opinion of a home’s value and has provided an intriguing look into the psychographics of our housing market,” he said. “The most recent HPPI indicates homeowners and appraisers are closer to agreeing at the end of 2016 than they were at the start of the new year. It’s our hope that with this information the only surprises this holiday season are the ones wrapped under the tree.” 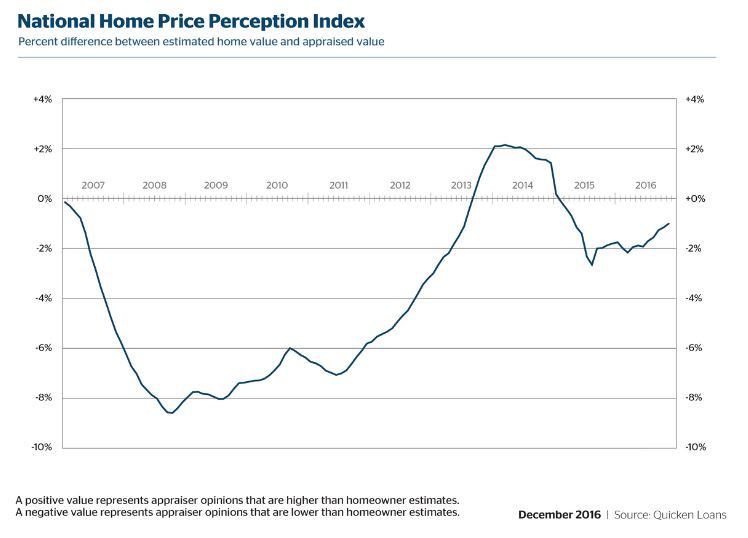 Despite some monthly variations, appraisal values measured by the Quicken's National Home Value Index (HVI) have been rising throughout 2016, with home values rising 5.54 percent since January. The average appraiser valuation increased 0.42 percent and 5.28 percent year-over-year in November.

Walters saw that home values were driven by a lack of inventory in 2016. “Home values pushed higher throughout 2016, largely driven by lack of supply in the hottest markets,” said Walters. “It’s yet to be seen if these increases will continue or wane as homebuilding grows, boosting inventory.”