The latest Originations Market Monitor from Black Knight Inc, shows a big slowdown in momentum in November as rate lock volumes fell across the board, driven by rate/term refinance originations dropping another 9.4% for a nearly 65% year-over-year decline.

"While 30-year rates ended November relatively flat from where they were at the start of the month, there was some volatility in rate offerings throughout the month," said Scott Happ, President of Black Knight Secondary Marketing Technologies. "Rates moved up and down within a roughly 21 basis point range throughout the month as the market digested news of both the Fed's tapering announcement and the new Omicron variant. Indeed, our OBMMI Daily Interest Rate Tracker showed average offerings reaching as high as 3.36% in the week leading up to Thanksgiving before settling."

According to Black Knight, this November marked the third consecutive monthly decline in overall origination volume, bringing it to its lowest level since February 2020, prior to the onset of the pandemic.

“The month's pipeline data showed overall rate locks down 4.7% from October, driven by a 9.4% drop in rate/term origination activity,” the report said. “While this was the third consecutive monthly decline, rate/term refinance lending has actually fallen in eight of the 11 months of 2021 thus far and is now down 65% from last November's level.”

Interest rates themselves had a volatile month, as seen by Black Knight’s Daily Interest Rate Tracker. Rates reached as high as 3.36%, but by the end of the month, the average 30-year conforming rate offering stood at 3.27%, the same as seen in October.

"While the rate of home price growth has slowed, it is still historically quite robust," Happ continued. "As a result, we continue to see non-conforming jumbo loan products gain market share at the expense of agency volumes. With higher conforming loan limits announced by the FHFA taking effect at the start of 2022, it will be interesting to see to what degree this trend persists. As it is, the average loan amount rose another $7,000 to reach $337,000 in November." 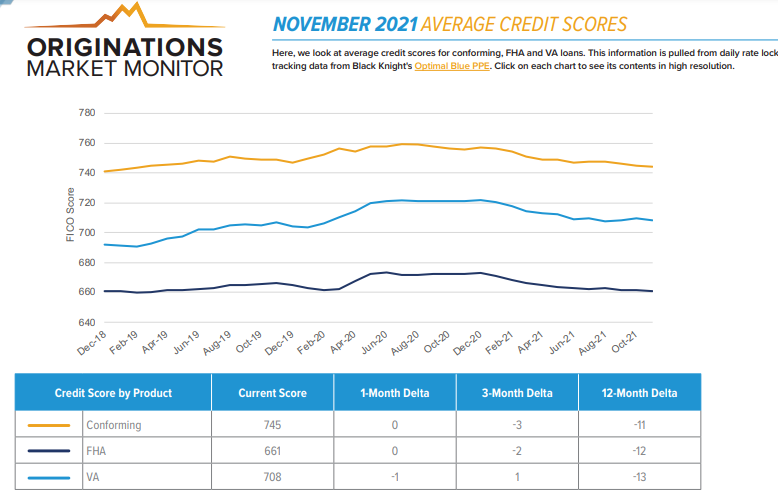