Unlocking a New Wave of Innovation 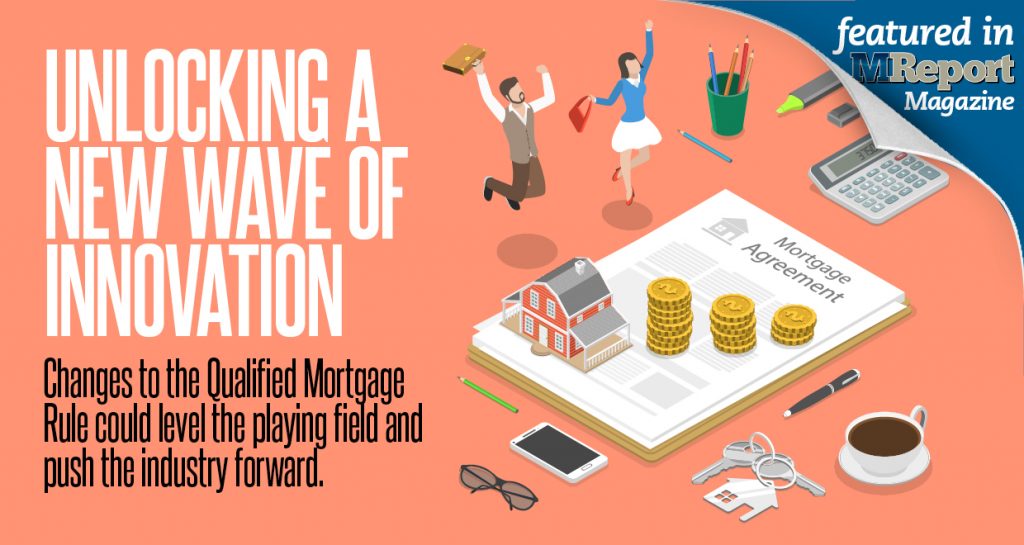 On July 31, the CFPB issued an Advance Note of Proposed Rulemaking (ANPR) seeking industry feedback related to the definition of Qualified Mortgage (QM) under the Ability to Repay Rule (ATR Rule or Rule). Although the ANPR elicited comments from stakeholders that typically represent opposite ends of the consumer finance ideological spectrum, industry, and consumer advocates’ letters alike coalesced around the recommendations that use of Appendix Q should not be required and the 43% debt-toincome (DTI) threshold should not define QM loans.

The elimination of Appendix Q will create the opportunity for a new wave of innovation, expand access to credit, reduce costs, and level the playing field with the GSEs without increasing risk to consumers or the market. This is true after the elimination of Appendix Q the Rule will continue to require lenders to verify income, employment, and assets using reliable third-party records and make a reasonable and good faith determination that the consumer can repay the loan.

Getting to Know Appendix Q

Appendix Q is the primary obstacle to innovation in the mortgage industry today. Its rigidity does not account for the multiple responsible methods, including GSE underwriting guidelines, to prudently underwrite a loan. It is also stale. The CFPB has not updated Appendix Q since the Rule was originally adopted in 2013. In contrast, FNMA and FHLMC make monthly changes and enhancements to their guidelines. Appendix Q also acts to prevent some consumers from accessing credit. The best example of this is self-employed customers. Appendix Q places more stringent documentation standards on self-employed customers, at times requiring them to create documentation solely to qualify for the loan, arguably wasting time better spent running their business. Customers who participate in the growing “gig” economy also face challenges when obtaining credit under Appendix Q, which did not anticipate this type of customer when it was written, and which is unable to be modified to accommodate them and their growing importance in today’s economy.

Since the adoption of the ATR Rule, creditors have, generally speaking, chosen to limit their lending to loans that meet the QM definition to avail themselves of the litigation protection and exemption from risk retention that comes with QM loans. This desire to originate QM loans combined with the rigidity and staleness of Appendix Q has driven industrywide innovation in underwriting techniques to the GSEs by virtue of the QM “Patch.” If the playing field is leveled by eliminating the DTI threshold and requirement to use Appendix Q for non-agency loans, lenders and financial technology firms could begin responsible innovation in the QM space.

Eliminating Appendix Q will also benefit customers and lenders by reducing costs, increasing capacity, and improving the customer and employee experiences. Removing the Appendix Q obstacle would create an environment where new income verification techniques can be developed, tested, and enhanced. Take, for example, the process of digitally verifying income through direct deposits in a bank account, which is now inhibited by Appendix Q, but could result in a QM origination once Appendix Q underwriting is no longer mandated. This example and other techniques can be deployed while still maintaining a fully verified loan using reasonable third-party records as required under the Rule. Moreover, since many of these innovative techniques obtain information directly from third-party sources (versus customer-provided), it has the potential to reduce fraud risk. To ensure a healthy housing finance marketplace, it is essential to maintain a continued commitment to responsible lending standards that ensure customers have the ability to repay their loans. Although promoting innovations that reduce costs for customers and expanding access to credit is critical for the industry, it must be balanced with prudent and responsible underwriting standards. Among many solutions to achieving this goal, is ensuring independence between the person(s) responsible for establishing and changing credit policy from the origination process. This avoids conflicts of interest between employees focused on volume and profitability from those focused on ensuring the affordability and sustainability of loans. This could be modeled of the success of the appraisal independence requirements of FIRREA in 1989.

Mortgages and home finance represent one of the most important segments of the American economy. Currently, Americans have outstanding mortgage balances of over $10 trillion during a period where the annual GDP is nearing $20 trillion. It is important for the health of the country that we get home finance correct. These proposed changes to the QM Rule have the ability to dramatically improve mortgage finance for customers, lenders, and investors

Erik Schmitt is the Managing Director of the Origination Division at Chase’s Home Lending. In his role, Schmitt leads product management for Chase’s origination and servicing businesses to ensure its products meet the needs of customers, while positioning the mortgage business for long-term success. Previously, Schmitt led a team responsible for the firm’s foreclosure prevention and loss mitigation products.

A new report found there are “storm clouds” gathering around the housing market, as foreclosure risks increased for certain counties.