Freddie Mac: No Encore for Housing in 2017 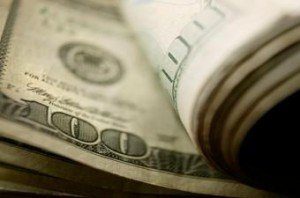 The year 2016 was the best for housing since before the crash by nearly any measure—existing-home sales at their highest level in nine years, increased refinance and purchase activity due to near-record low interest rates for much of the year, and foreclosure and default rates at their lowest levels since before the recession.

Unfortunately, according to Freddie Mac, housing is not likely to repeat its stellar year in 2017, primarily due to the Fed raising the federal funds target rate in December—and the prospect of two or three more rate hikes in 2017.

“Over the next two years we anticipate the economy will keep growing at a modest pace, inflation will pick up and the labor market will stay at full employment,” Freddie Mac Chief Economist Sean Becketti said. “Interest rates will gradually rise as the Federal Reserve continues on its path of policy normalization. Housing markets will slow a bit in 2017, but they will recover after they absorb the initial shock of higher interest rates.”

Freddie Mac is forecasting $1 trillion in refinance originations for the full year of 2016, the highest amount in four years. Cash out refi volume was up by $10 billion for the first three quarters of 2016 compared to 2015 ($42 billion compared to $32 billion). However, Freddie Mac is predicting that the higher interest rates will take their toll on refi volume over the next two years as the refinance share of originations is expected to fall to 28 percent in 2017 and 20 percent in 2018. 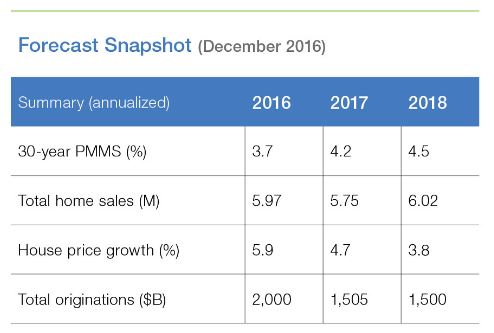 Increased purchase originations will likely offset some of the decline in refinances, but Freddie Mac is expecting overall origination volume to drop by one-quarter in 2017 compared to 2016.

Buyers will still be facing affordability challenges over the next two years, according to Freddie Mac, because even though the pace of home price appreciation is expected to slow down (from 5.9 percent in 2016, to 4.7 percent in 2017, to 3.8 percent in 2018), wage growth is still not expected to keep pace with home price growth.

Becketti noted that the rising mortgage interest rates could potentially stop housing's momentum it gained in 2016, “But the fundamentals favor improvement in housing markets. Population and income growth should support housing demand going forward. We anticipate that, after housing absorbs the shock of higher interest rates over time, it resumes on its upward path, and 2018 ends up being a strong year for housing markets despite forecasted increases in mortgage rates.”